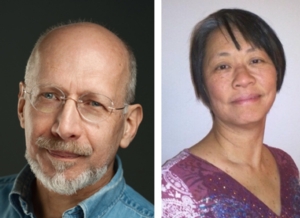 John Schoffstall has published short fiction in Asimov’s, The Magazine of Fantasy & Science Fiction, Interzone, Strange Horizons, and other venues. Half Witch is his first novel. It received a Kirkus starred review, and has been well-reviewed in Locus and the New York Times, among others. NPR named it one of the Best Books of 2018. Dr. Schoffstall is an Emergency Medicine physician, now retired. He lives in the Philadelphia area.

Brenda W. Clough has been publishing novels since 1984, the best known probably being How Like A God which came out from Tor Books. Her novel, Revise the World, is available in electronic format at Book View Café. A version of it was a finalist for both the Hugo and Nebula awards. In addition to her seven novels, she has written many short stories, nonfiction, and innumerable book reviews. Her latest time travel trilogy is Edge to Center, also from Book View, and she has a neo-Victorian thriller A Most Dangerous Woman, from Serial Box at. Her complete bibliography is up on her web page, brendaclough.net