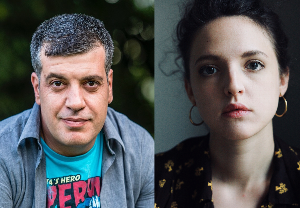 “A master of subtle nuance in dealing with both Arab and Jewish society” (New York Times), Sayed Kashua is an Arab Israeli who has lived in Jerusalem for most of his life. He writes a weekly column for Haaretz, published a book of essays titled Native: Dispatches from an Israeli-Palestinian Life, and is the author of the novels Dancing Arabs, Let It Be Morning, and Second Person Singular. In his latest novel, Kashua follows a Palestinian émigré who leaves a comfortable American life to visit his estranged dying father.

The Parisian, Isabella Hammad’s “lavish, leisurely and immersive” (Economist) debut novel, is the story of a young medical student from a small town in Ottoman Palestine who moves to France on the eve of World War I. Winner of the Palestine Book Award, it was a New York Times Notable Book and one of Vogue’s Best Novels of 2019. Hammad’s other writing has appeared in Conjunctions and the Paris Review, in which her story “Mr. Can’aan” won the 2018 Plimpton Prize.