Lorene Cary, 45, writes about affecting issues: race, the lives of women, education, growing up. And she writes about them in fiction and nonfiction forms. She lives in Center City with her husband, Robert C. Smith, a writer who recently was ordained as an Episcopal priest, and their daughters, Laura, 17, and Zoe, 8. Ms. Cary won a $50,000 grant from the Pew Fellowships in the Arts in 1995, the year The Price of a Child was published.

Cary has been a contributing editor for Newsweek and an associate editor at TV Guide, and her essays and articles have also appeared in The New York Times, The Philadelphia Inquirer, American Visions, Essence, and Philadelphia magazine. Cary received an M.A and a B.A. from the University of Pennsylvania and pursued additional graduate study at the Sussex University in Falmer, England (M.A.). She is currently a lecturer on fiction writing at the University of Pennsylvania and has been a guest lecturer at Harvard University, Bryn Mawr College, Carleton College, Case Western Reserve University, Denison University, Illinois Weslyan University, Georgia State University, and St. John's University. In addition, Cary has founded the Art Sanctuary program for African American arts and culture at the Church of the Advocate in North Philadelphia, bringing top African American writers, musicians and poets to perform in North Philadelphia. 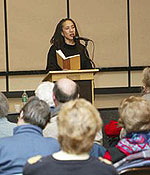 Her book Pride, published by Doubleday in 1998 tells the story of four African American female friends. She has also published The Price of a Child (1995), a historical novel about the Underground Railroad, and Black Ice (1991), a memoir of her own life as the first black female student and then teacher at St. Paul's School in New England.

The One Book, One Philadelphia committee recently chose her novel The Price of a Child as the book the entire city will read and discuss. Her book, she says, is an answer to Gone With the Wind, which has fascinated her since she was young. "This is an Underground Railroad story, a story about states' vs. federal rights, a play within a play about freedom - set in the middle of a land of freedom and a city of freedom. This is the kernel of the American story. It's another way of looking at who we are as Americans."