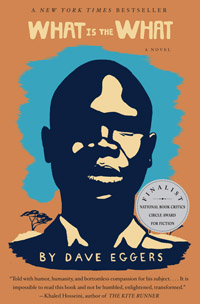 One Book, One Philadelphia is a joint project of the Mayor’s Office and the Free Library of Philadelphia. The mission of the program, which is entering its sixth consecutive year, is to promote reading, literacy, library usage, and community building throughout the Greater Philadelphia region. The 2008 One Book program runs from January 8 through March 20, 2008.

The One Book, One Philadelphia Selection Committee has chosen Dave Eggers' What Is the What as the featured selection for 2008. What Is the What is an epic novel based on the life of Valentino Achak Deng who, along with thousands of other children (the so-called Lost Boys of Sudan), was forced to leave his village at the age of seven and trek hundreds of miles by foot—pursued by militias, government bombers, and wild animals—crossing the deserts of three countries to find freedom, eventually settling in the United States.

In an effort to engage a wider audience and to encourage multi-generational reading, the One Book Selection Committee has also endorsed two thematically related books for children, teens, and family reading: Mary Williams' Brothers in Hope: The Story of the Lost Boys of Sudan and Mawi Asgedom's Of Beetles and Angels: A Boy’s Remarkable Journey from a Refugee Camp to Harvard.

Hundreds of Community Partners have contributed resources and developed programs to facilitate the success of One Book, One Philadelphia. We thank our sponsors and partners—especially our lead sponsor for the sixth consecutive year, Independence Blue Cross—for their tremendous support.