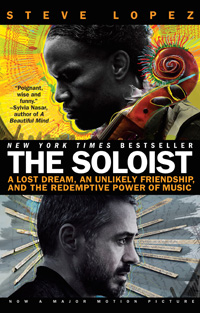 The One Book, One Philadelphia Selection Committee has chosen Steve Lopez’s The Soloist as the featured selection for 2009. The story follows Lopez, a columnist for the Los Angeles Times, as he sees Nathaniel Ayers playing his heart out on a violin with two strings in Los Angeles’ Skid Row. Envisioning this “Violin Man” as the topic of his next column, Lopez befriends Ayers, and uncovers an even more extraordinary story about a street musician who was once a promising Juilliard student. While Lopez initially set out to improve Ayers’ circumstances, he finds that it is his own life that has changed for the better.

One Book, One Philadelphia is a joint project of the Mayor’s Office and the Free Library of Philadelphia that promotes reading, literacy, library use, and community building by motivating tens of thousands of people to read an annual featured selection. Marking the seventh consecutive year for One Book, the 2009 program runs from January 14 to March 19, 2009.

In addition to the featured selection, for the third year in a row, One Book has named two thematically related companion books for children, teens, and family reading: Steve Seskin and Allen Shamblin’s A Chance to Shine and The Double Life of Zoe Flynn, by Janet Lee Carey.

Hundreds of Community Partners have contributed resources and developed programs to facilitate the success of One Book, One Philadelphia. We thank our sponsors and partners — especially Independence Blue Cross, our lead sponsor for the seventh year in a row—for their tremendous support.

Stay tuned for a complete list of One Book, One Philadelphia events, suggested supplemental reading and film lists, a comprehensive Resource Guide, and much more!

Watch an interview with Steve Lopez and Nathaniel Ayers on CBS's 60 Minutes (below):