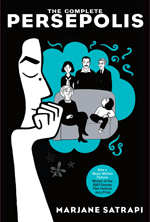 The Complete Persepolis by Marjane Satrapi

The Complete Persepolis is the story of Satrapi's unforgettable childhood and coming of age within a large and loving family in Tehran during the Islamic Revolution; of the contradictions between private life and public life in a country plagued by political upheaval; of her high school years in Vienna facing the trails of adolescence far from her family; of her homecoming--both sweet and terrible; and, finally, of her self-imposed exile from her beloved homeland. It is the chronicle of a girlhood and adolescence at once outrageous and familiar, a young life entwined with the history of her country yet filled with the universal trials and joys of growing up. Edgy, searingly observant, and candid, often heartbreaking but threaded throughout with raw humor and hard-earned wisdom—The Complete Persepolis is a stunning work from one of the most highly regarded, singularly talented graphic artists at work today. 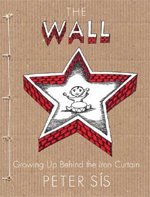 The Wall: Growing Up Behind the Iron Curtain by Peter Sís

Through annotated illustrations, journals, maps, and dreamscapes, Peter Sís shows what life was like for a child who loved to draw, proudly wore the red scarf of a Young Pioneer, stood guard at the giant statue of Stalin, and believed whatever he was told to believe. But adolescence brought questions, and cracks began to appear in the Iron Curtain as news from the West slowly filtered into the country. Sís learned about beat poetry, rock 'n' roll, blue jeans, and Coca-Cola. He let his hair grow long, secretly read banned books, and joined a rock band. The short-lived yet magical Prague Spring of 1968 provided a glimpse of new possibilities for Sís—creativity could be discouraged but not easily killed. 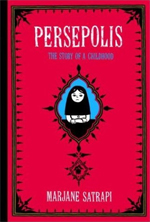 Persepolis: The Story of a Childhood by Marjane Satrapi

The first of two volumes that make up The Complete Persepolis, The Story of a Childhood follows Satrapi through her early years in Iran. After the Shah is overthrown when she is nine years old, Satrapi's world changes as her neighborhood is bombed, family members are killed, and parties become forbidden. Satrapi and her parents struggle with her education, as well as her rebellious streak.