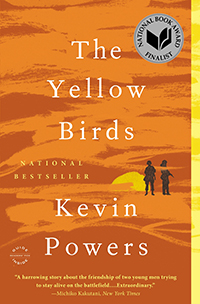 The One Book, One Philadelphia Selection Committee chose the recent National Book Award finalist, The Yellow Birds by Kevin Powers for its 2014 selection. Winner of the 2013 PEN/Hemingway Award for First Fiction and a finalist for the 2012 National Book Award, The Yellow Birds has been compared to Tim O’Brien’s classic war novel, The Things They Carried, for its powerful depiction of the truth and tragedy of war. Poet/novelist Powers vividly tells the story of a young soldier struggling to find meaning in his harrowing experiences in Iraq, while suffering profound guilt over his friend and fellow soldier’s death, as well as alienation from community and family upon his return home. According to The New York Times, "Kevin Powers has something to say, something deeply moving about the frailty of man and the brutality of war, and we should all lean closer and listen."

One Book, One Philadelphia is a joint project of the Mayor's Office and the Free Library of Philadelphia that has the goal of promoting literacy and encouraging the Philadelphia community to come together through reading and discussing a single book. Each year, lectures, discussions, films, workshops, exhibitions, and performances illuminate both specific and universal themes within a featured selection. The 2014 program ran from January 22nd to March 19th.

Hundreds of community partners developed programs and contributed resources to help ensure a successful year of One Book, One Philadelphia. We are grateful for our sponsors and partners for their tremendous support!

If you have questions or would like more information about One Book, please call 215-814-3514 or e-mail onebook@freelibrary.org. We hope that you enjoyed our 12th year of One Book, One Philadelphia.

Special thanks to Dietz & Watson and Pepper Hamilton, LLP for their underwriting support.