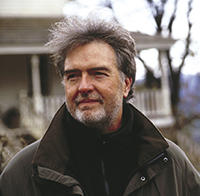 Born in Asheville, North Carolina, Dr. Charles Frazier is the author of Cold Mountain, Thirteen Moons, and Nightwoods. His novel Cold Mountain, the 2016 featured One Book, One Philadelphia selection, won the 1997 National Book Award and is based on stories passed down from Frazier's father about his great-great-uncle William Pinkney Inman, a Civil War soldier. Cold Mountain was adapted into a film directed by Anthony Minghella and starring Jude Law, Nicole Kidman, and Renée Zellweger; and most recently, an original opera composed by Jennifer Hidgon and Gene Scheer, which premiered in Santa Fe in September 2015. Frazier's three novels have been New York Times bestsellers and focus on the North Carolina mountains and the culture and history therein. Charles Frazier is a graduate of the University of North Carolina, earned an M.A. from Appalachian State University, and received his Ph.D. in English from the University of South Carolina. He lives with his wife Katherine Frazier, and they have an adult daughter, Annie.