Throw Those Horns In the Air in Celebration of Hellboy's 25th Anniversary!

This Saturday, March 23 marks the 25th anniversary of Hellboy and has been designated Hellboy Day across libraries, comic book shops, and bookstores around the world!

What's a "Hellboy", you ask? Why he's just your extra-ordinary, lovable, big, red guy with a short-temper, a tail, (filed-down) horns, and the Right Hand of Doom, who has wild adventures fighting Nazis, mad scientists, other-worldly monsters, and the unexplained! Artist and writer Mike Mignola's comic creation has been entertaining readers for a quarter of a century, with the character's adventures having appeared in what is known as the "Mignolaverse"—a strange, shared universe of comic books and graphic novels, comprised of acclaimed titles including the B.P.R.D., Abe Sapien, Crimson Lotus, Frankenstein Underground, Lobster Johnson, The Visitor: How and Why He Stayed, and Sir Edward Grey—The Witchfinder.

Dark Horse Comics is throwing a celebration by publishing a 25th anniversary edition of Hellboy: Seed of Destruction issue #1, featuring a new cover by Mignola and colorist Dave Stewart. There was even a pancake and maple syrup-flavored beer released to toast the big red guy on his special day!

Guillermo Del Toro's two Hellboy movies, Hellboy and Hellboy II: The Golden Army released in 2004 and 2008 respectively, were well-received blockbuster CGI fantasy adventures, but only loosely followed the comic book texts. This newest installment in the Hellboy mythos is supposed to follow one distinct comic story arc told over the following three volumes: 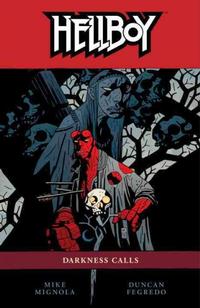 Darkness Calls
At the beginning of this volume, Hellboy has cut ties with the B.P.R.D. (The Bureau for Paranormal Research and Defense, natch!) and begun traveling the weird wide world on his own. This part of the story again brings Hellboy into conflict with the Baba Yaga, the Russian witch who harbors a deep grudge against our hero after he destroyed one of her eyes. Baba Yaga hires an unkillable assassin named Koschei the Deathless to hunt Hellboy and literally claim an eye for an eye... 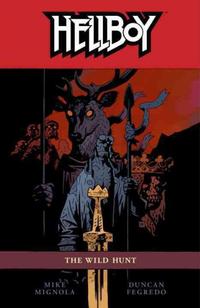 The Wild Hunt
This volume of the story is pivotal as it finally reveals Hellboy's full origin story and devilish parentage, including nods to Arthurian lore and turns a focus towards Nimue the Blood Queen (played by Milla Jovovich in the new movie) who readers first meet in Darkness Calls. The only way Hellboy can stop her is to finally confront the truth about his own dark heritage, but first he'll have to join an ancient band of fellow monster hunters called the Wild Hunt who are on the tracking down some ancient giants who have been reawakened in the British Isles... 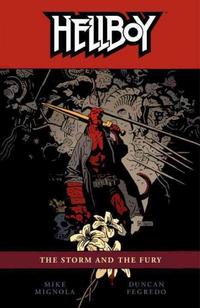 The Storm and the Fury
This volume sets up the third act and climax of the film, where Hellboy will have an ultimate showdown between Hell and Earth for the survival of humankind. Will Hellboy take up Excalibur and go to war with the Blood Queen and her army of witches, beasts, and a... dragon? Will Hellboy embrace his devilish destiny or fight for his on hellish humanity? Is Hellboy the savior or destroyer of the world? Read (and watch) to find out!

And just so you don't get totally lost or just want to refresh your memory before the new film debut, Dark Horse Comics has created this all-encompassing timeline of the Mignolaverse and Hellboy's place in it.

Can't get enough Hellboy and want to read more of his adventures? Browse this catalog list or head over to Hoopla for over 100 Hellboy and Hellboy-related titles! 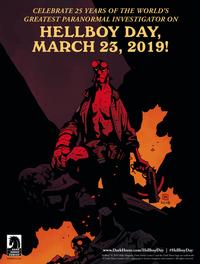 Saturday, March 23, 2019 marks the 25th anniversary of Hellboy and has been declared "Hellboy Day"! 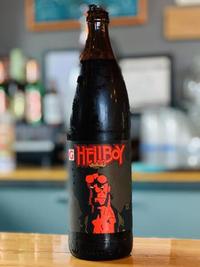 Check out the all-encompassing timeline of the Mignolaverse and Hellboy's place in it!
Add a Comment