While this Sunday, February 9, marks the 92nd Academy Awards ceremony, it was recently revealed by a Gallup Poll that in 2019—more people went to the library than the movies!

Is it any coincidence that the majority of this year's Oscar-nominated films are adaptations from books? Well, yes and no. Ever since the invention of film, books and previously written stories have been the inspiration and basis for many, many movies. This year's book-adaptation-to-Oscar-nomination tally amounts to 7 films with 37 nominations in 16 categories!

Here at the library, we of course always like to put the spotlight on those authors who created these influential stories and characters. So without further adieu, check out the following list of this year's nominated films that were adapted from books (including two that have now been adapted and remade for the silver screen 8 (Little Women) and 50 (Les Misérables) times, respectively...

Adapted from the book: I Heard You Paint Houses by Charles Brandt

Adapted from the Book: Caging Skies by Christine Leunens

Adapted from the book: Little Women by Louisa May Alcott

Adapted from the Book: The Pope by Anthony McCarten

Adapted from the book: The Infinity Gauntlet Marvel Comics series

Adapted from the book: Les Misérables by Victor Hugo

And don't worry if you haven't seen any or all of the nominated films—you can always browse our catalog for Criterion Collection films, Best Picture-winning films from years past, thought-provoking documentaries, explore our Digital Media Portal for on-demand movie streaming, and after this year's Oscars, place holds on all the nominated and award-winning films that you want to watch!

What films do you think will win Oscars this year? Which books would you like to see adapted into future films? Let us know in the comments! 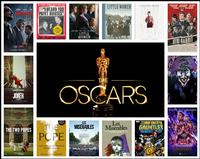 Which book-to-screen nominated films do you think will win Oscars this year?
Add a Comment