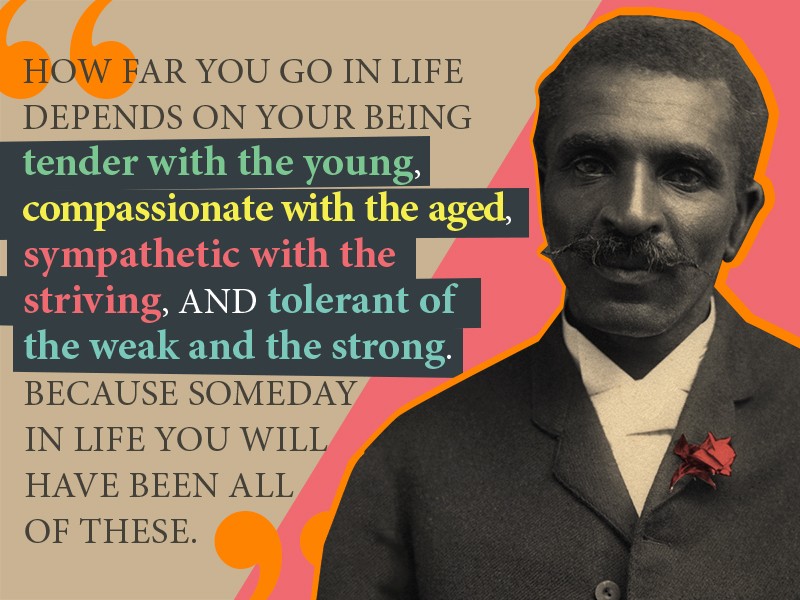 "How far you go in life depends on your being tender with the young, compassionate with the aged, sympathetic with the striving, and tolerant of the weak and the strong. Because someday in life you will have been all of these." — George Washington Carver

George Washington Carver lived an extraordinary life. Born a slave on a farm in Missouri in the 1860s (he did not know his exact birthdate), he became an orphan as a baby. His father died before he was born and his mother was kidnapped and sold by outlaws to another slave owner. He never saw her again. Carver lived with and was educated by Moses Carver, the man who formerly enslaved him, until his teenage years. He referred to himself as "Carver’s George" until he left home and then took Carver as his last name. As a child, Carver loved everything about plants and grew a secret garden in the woods. He cultivated flowers there, which was considered a frivolous pastime in his poor farming community.

After considerable difficulty, Carver received a formal education. He applied to Highland College in Kansas and was accepted for admission. When he arrived for classes, however, he was told he could not enroll because of his race. Undeterred, he was accepted at Iowa State Agricultural College and became their first African American graduate. After earning his master's degree there, he joined the faculty. Though his original plan was to research pure science, he decided he really wanted to improve the lives of farmers, especially poor African American farmers. He joined the Tuskegee Institute (now Tuskegee University) in Alabama as an agriculture professor where he developed new farming methods, new products and became a beloved teacher.

In the 19th century, the most important crop in the southern U.S was cotton. Cotton depleted the soil of its nutrients, however, and after a few years, the soil was useless for growing anything. Carver proposed crop rotation as a way to prevent soil depletion and erosion. By rotating cotton with other crops such as peanuts and sweet potatoes, the farming soil retained its nutrients and farmers had additional food crops to eat and sell.

To address the resulting question of, "What are we going to do with all these peanuts?", Carver promoted peanut uses. In 1916, he published a book entitled How to Grow the Peanut and 105 Ways of Preparing it For Human Consumption which included recipes for peanut soup, peanut bread, peanut ice cream, peanut cake, liver with peanuts, peanut macaroni and cheese, and of course, peanut butter.

Contrary to popular belief, Carver did not invent peanut butter. Native Americans of Central and South America likely first created peanut butter 3,000 years ago. The U.S. is now one of the top three consuming countries of peanut butter in the world, likely due in no small part to Carver popularizing the peanut and its uses for Americans. 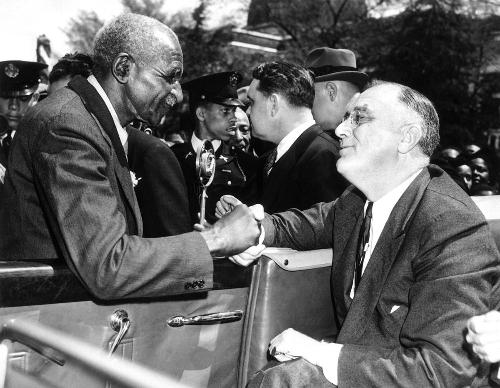 Throughout his life, Carver’s renown grew and he became a celebrity. President Franklin Roosevelt visited and consulted him about agricultural issues. Henry Ford and Gandhi counted him as a friend. He testified before Congress in 1921 (to applause) about the peanut growing industry and was one of the few Americans and first African American inducted into the exclusive British Royal Society of the Arts in 1916. He was hailed as the "Black Leonardo" by Time magazine in 1941.

Refusing other lucrative employment offers, Carver taught for 47 years at Tuskegee and was beloved by those in his classes. He corresponded regularly with and was a mentor to former students. Though he was a household name in his lifetime, indeed the most famous African American person of his generation, he remained modest about his many accomplishments, honors,  and commendations. In a thank-you note written in 1922 to one of his classes for the gift of a fountain pen, Carver told his students that he hoped they would reach "the full height of [their] possibilities" by possessing what he called the "Eight Cardinal Virtues":

Despite tremendous adversity, Carver persevered. Born a slave, he doggedly sought an education. He strove to help people, especially the poor, rather than seek wealth. Through the promotion of natural farming techniques, he conserved the environment. He was famous, but modest. He loved his students and they loved him, many considering him a father. He freely shared wisdom with others and asked little in return. A devoted friend and an inspiration to many, he lived an extraordinary life.

George Washington Carver passed away in Tuskegee, Alabama on January 5, 1943, at approximately age 79. He is buried in the Tuskegee University Campus Cemetery, where his headstone reads:

He could have added fortune to fame, but caring for neither, he found happiness and honor in being helpful to the world.

George Washington Carver as a teenager, circa 1880
George Washington Carver as a adult, circa 1906
2 Comments | Add a Comment
I admire this Gentleman. His words of wisdom to everyone around him. Very Great man I am glad his story about him and as publish so we all could read about how wonderful he was and how he overcame rejections and still stood tall. 👏🙏🏻❤️
Sunny - Del City Oklahoma
so cool
Chevone Gordon - Orange