New Book to Screen Adaptations from Netflix This July!

Readers are no strangers to having their favorite books and characters adapted for the screen, and Netflix, in particular, is one of the biggest purveyors of bringing those pages to life via digital and streaming media.

The following four fan favorites all debut this month, so let's find out the who, what, when, where, why, and how!

A new series based on the Scholastic Books' mainstay, The Baby-Sitters Club, premiered July 3.

Synopsis: It's more than a club, they're best friends! Join in on the fun and follow the adventures of Kristy, Mary-Anne, Claudia, Stacey, and Dawn as they start their babysitting business⁠—all while navigating middle school and growing up. The Baby-Sitters Club series of novels, written by Ann M. Martin and published between 1986 and 2000, has sold 176 million copies!

The Old Guard, a Charlize Theron-starring superhero film based on a comic book series written by Greg Rucka and illustrated by Leandro Fernandez, premieres July 10.

Number of Graphic Novels in Series: 2

Availability: ebook on Overdrive and Hoopla

Synopsis: Cursed with immortality, warrior Andromache of Scythia—or Andy, for short—and her covert group of tight-knit mercenaries have been protecting the mortal world for centuries. In the 21st century, being immortal is a difficult secret to keep, and when you live long enough, you learn that there are many fates far worse than death. A gritty action-packed story that shows living forever is harder than it looks.

Cursed, based on the YA novel written by Thomas Wheeler and featuring illustrations by comics legend Frank Miller, premieres July 17.

Availability: Book from our catalog

Synopsis: A re-imagining of the Arthurian legend, told through the eyes of Nimue, a young heroine with a mysterious gift who is destined to become the powerful (and tragic) Lady of the Lake. After her mother’s death, she finds an unexpected partner in Arthur, a young mercenary, in a quest to find Merlin and deliver an ancient sword. Over the course of her journey, Nimue will become a symbol of courage and rebellion against the terrifying Red Paladins, and their complicit King Uther. Whosoever wields the Sword of Power shall be the one true... Queen!

Season two of The Umbrella Academy, based on the award-winning comic book series by writer and musician Gerard Way and artist Gabriel Bá, premieres July 31.

Number of Graphics Novels in Series: 3

Availability: Books from our catalog, ebooks from Hoopla

Synopsis: Time travel gone wrong? Superpowered teens run amok? A dysfunctional family dramedy? Yes. This show is all of those things... and a whole lot more! The Academy is led by The Monocle (Sir Reginald Hargreeves), an alien disguised as a wealthy entrepreneur and world-renowned scientist who adopts 7 babies and raises them up to be superheroes with extraordinary powers: Spaceboy (Luther Hargreeves), The Kraken (Diego Hargreeves), The Rumor (Allison Hargreeves), The Séance (Klaus Hargreeves), The Boy (Number Five), The Horror (Ben Hargreeves), and The White Violin (Vanya Hargreeves). In the season one cliffhanger... [SPOILERS]Vanya brought upon the apocalypse[/SPOILERS]... and now the family has been scattered apart and must fight to save the future and themselves in the process. Highly Recommended read and watch!

Here at the library, we of course always like to put the spotlight on the authors and creators who have given these stories and characters life, so please browse through our catalog for more!

Are you looking forward to watching any of the above adaptations? Which stories and characters do you think should be adapted from book to screen next? Let us know in the comments! 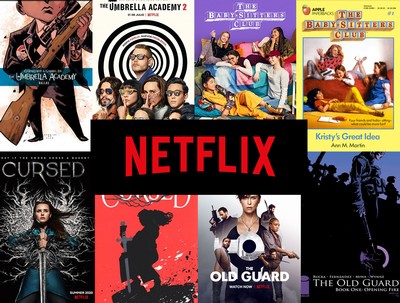 Netflix is adapting these stories and characters into series and films this July!
Add a Comment