Turn the lights down, grab some snacks, and tune into your screen of choice—the National Film Registry's 2021 recommendations and selections have been announced!

25 films have been selected each year—for the past 33 years—to be preserved in the Library of Congress, showcasing the range and diversity of American film heritage. 2021's selected films include award-winners, big-budget blockbusters, silent films, independent shorts, animated films, cult classics, documentaries, book-to-screen adaptations, and many more, spanning a period from 1902 to 2008.

You can browse and check out the majority of this year's selected films from our catalog, available in DVD and Blu-ray formats, while others can be found in the public domain or viewable via video-sharing websites like YouTube and Vimeo.

The total number of films in the registry is now 825!

Cooley High (1975, DVD)
Coming-of-age dramedy set in Chicago centering on the lives and misadventures of Black high schoolers. The film was an influence on future Black directors like John Singleton and Spike Lee, as well as being the basis for the classic sitcom What's Happening!!.

Flowers and Trees (1932, YouTube)
A significant animated feat, as this cartoon was the first three-strip Technicolor film shown in movie theaters. After its success, Walt Disney went on to make only full-color animated shorts and films, including Snow White and The Seven Dwarfs (which was inducted into the National Film Registry in 1989)

The Lord of the Rings: The Fellowship of the Ring (2001, DVD and Blu-ray)
The first film in Peter Jackson's trilogy adaptation of J.R.R. Tolkien's epic fantasy tome. Filmed on location in the lush nature of New Zealand and featuring grand special fx, this is a film that truly needs to be experienced on the big screen in a theater.

The Murder of Fred Hampton (1971, DVD)
Documentary about the life (and untimely death at the hands of the police) of Fred Hampton, the then 21-year old leader of the Illinois chapter of the Black Panther Party.

Pink Flamingos (1972, DVD)
The cult classic film that truly put John Waters on the top of the cinematic trash heap, made Divine a star, and practically invented the idea of the midnite movie.

Requiem-29 (1970, YouTube)
UCLA's Ethno-Communications Program's collective student film of the East Los Angeles Chicano Moratorium Against the War in Vietnam, on August 29, 1970, including the brutal police response, and later funeral and inquest into the death of journalist Ruben Salazar.

Return of the Jedi (1983, DVD and Blu-ray)
The final chapter in the original Star Wars trilogy space opera sees Han Solo rescued from his carbonite slumber at Jabba the Hutt's palace, the Rebels fly off to destroy the second Death Star, Luke battles Darth Vader again... and lots of Ewoks.

Richard Pryor: Live in Concert (1979, DVD)
The title says it all: legendary comedian Richard Pryor delivers a live and uncensored comedy set that will not only make you laugh, but also think.

Sounder (1972, DVD)
Depression-era coming-of-age drama about a family of Black southern sharecroppers struggling with economic and personal hardships. Adapted from the 1970 novel of the same name by William H. Armstrong.

Strangers on a Train (1951, DVD)
Classic thriller from the Master of Suspense, Alfred Hitchcock, concerning two killers who make a devious plan to swap murders, giving each other the perfect alibi.

WALL•E (2008, DVD and Blu-ray)
Pixar Animation's uniquely original take on a love story, but between two robots who are trying to save the Earth. 2009 Academy Award-winner for Outstanding Animated Feature.

The Watermelon Woman (1996, DVD)
A young, Black, lesbian filmmaker explores the erasure of Black women from film history as she works on a documentary about the life of Fae Richards.

Who Killed Vincent Chin? (1987, Vimeo)
Documentary examining the 1982 murder of automotive engineer Vincent Chin by two white autoworkers in Detroit. The film raises issues concerning our justice system, civil rights, and the role of the media in our society.

The Wobblies (1979, YouTube)
Documentary about the Industrial Workers of the World (IWW) as they organized and demanded better wages, healthcare, overtime pay, and safer working conditions.

How many of these selected films have you seen? Which films in this list have you always wanted to watch but never got around to viewing? Which films do you think should be included in next year's selections? Let us know in the comments! 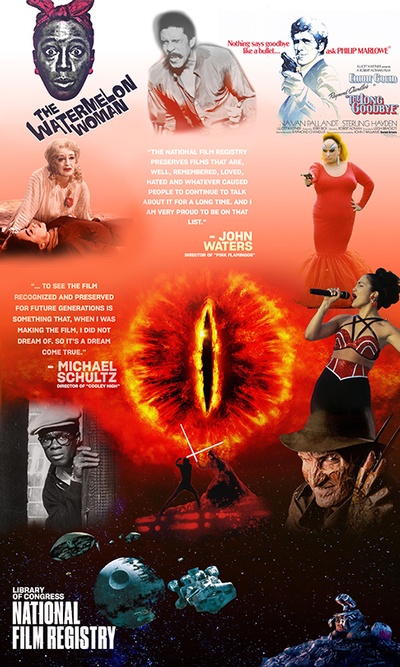