Most of us are familiar with the artwork created by the Works Progress Administration: the striking photography, the murals in state buildings and post offices, the posters, and the public sculptures, but fewer are aware of the work done by the writers and authors who produced that work.

The WPA relief programs were widely criticized as "boondoggles"—schemes to spend public money on "make work" projects. Not every needy worker was suited to road building or other concrete projects. "White collar" workers—librarians, historians, teachers, and writers—wanted to earn a wage too.

The Federal Writers’ Project was established in 1935 and immediately had to come up with something to write about that was not too controversial. While visual art is very subjective to interpretation and the iconography and allusion utilized by the artist might be subtle or invisible to the everyday viewer, the written word is more vulnerable to charges of subversion. If public funds were being spent, the product had to be something of broad-based appeal and offend as few people as possible. From this challenge came the American Guides Series.

The initial plan was to issue at least one guide for each state (in 1935, there were 48) and a handful of cities, including Philadelphia. The only comparable publication was the Baedeker series, which was wildly out of date, last published in 1909, and thus failing to reflect the advent of the automobile, which was already making vast changes to America’s culture and the landscape. The resulting guides were packed with descriptive detail about the geography, population, and industries of each area, as well as being rich in local history.

Those of us familiar with local history are aware of just how passionate residents can be about their stories. The American Guides would ultimately include stories that local "boosters’ clubs" would have preferred were omitted. It is safe to say that a close reading of the guides today will reveal troubling views and problematic language when viewed through a more current and critical lens. But maybe this is a valuable exercise, to take that lens to these books and see how the Guides stand up to the test of time—both in terms of how much the local environment has been altered and how much the picture created of "American culture" has transformed.

Our local guide published in 1937, Philadelphia: A Guide to the Nation’s Birthplace (also digitized and available to read online at Archive.org), features general information, a calendar of annual events, city history, and cultural characteristics. More than 300 pages are devoted to "Roads and Rambles in and around the city" (i.e. tours).

"City tour 6, Historic Germantown" offers a case study in change. Of the 39 featured stops on the tour as published in 1937, at least four have been demolished, three stand derelict, and all but one church has closed or relocated. #16, The Germantown branch of the Y. W. C. A., is currently in the news as community members fight the city councilperson over the pace and direction of redevelopment. While this is discouraging, a number of the remaining sites have formed a consortium named Historic Germantown to aid in preserving the buildings and do the hard work of revising the historic narrative to be inclusive and relevant to the present-day community. This partnership of 18 extraordinary historic houses, destinations, and museums in Northwest Philadelphia have joined together to protect, preserve, and share some of Philadelphia’s prized historical assets. Others remain private residences, their exteriors largely unchanged. #10 is the Germantown Friends Library, unique among school libraries for serving the neighborhood residents in addition to enrolled students.

Learn more about The New Deal and see artifacts from the Free Library's collections in our latest exhibition For The Greatest Number: The New Deal Revisited, on view in the William B. Dietrich Gallery, Rare Book Department, Third Floor, Parkway Central Library, Monday through Friday, 9:00 a.m. - 5:00 p.m., through February 4, 2022. 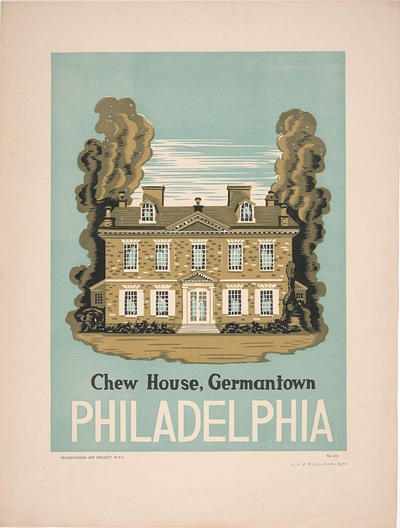 Chew Mansion was #27 on the WPA tour. The site is now run by the National Trust for Historic Preservation and known as Cliveden: https://cliveden.org 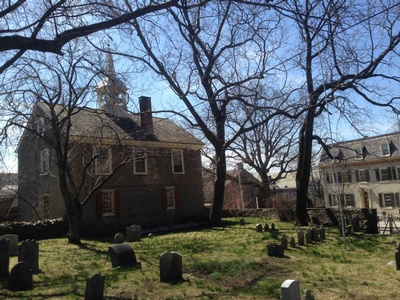