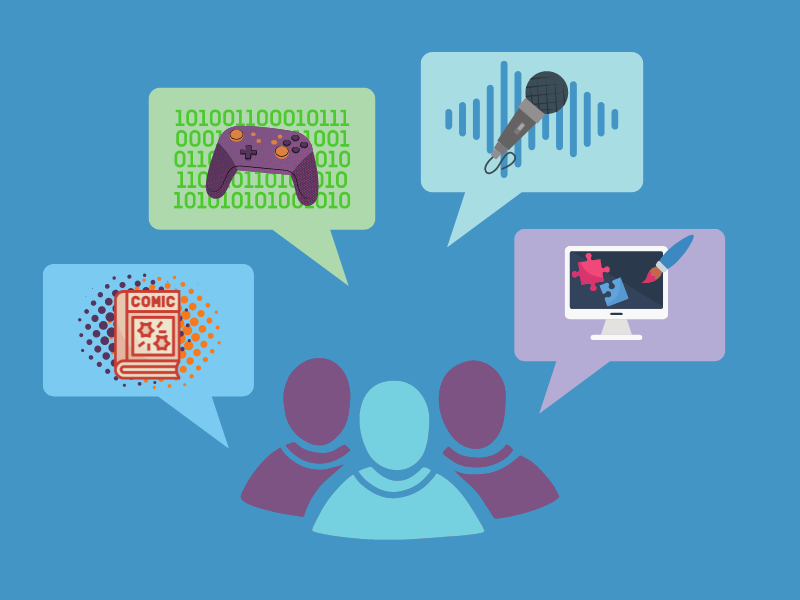 Throughout the month of July, Field Teen Center recorded interviews with a voice actor, four game designers, and a comic book writer.

If you’re interested in creative jobs or if you just want to learn more about how your favorite TV shows, games, and books are made, you won’t want to miss these!

Voice actor and improviser Mateo Ervin shared about his experience voice acting for Yu-Gi-Oh! Sevens and performing in the Dungeons and Dragons-inspired improv show The Twenty-Sided Tavern. He had some great advice about learning to love your own voice and how you can practice voice acting from home with even simple tools like a voice recording app on your phone.

In this video, 4 game designers from major game studios share their experiences: Janine Louie, Gameplay Programmer at Deck Nine; Katie Stone, Technical Artist at Iron Galaxy; Matt VanKleeck, Technical Dialogue Designer at Bungie; and Justin Maio, Programmer 2 at Deck Nine. They've worked on major games like Life is Strange, Minecraft, Destiny 2, and Rumbleverse. They shared how they got their jobs, what it’s like working for a game studio, and a bunch of resources for folks who want to learn more about game development.

Job Talk: A Conversation with Comics Writer Guy A. Sims

Guy A. Sims is both the Chief Diversity and Inclusion Officer of the Free Library and a comic book writer. He shared the process of adapting Monster, the novel by Walter Dean Myers, into a graphic novel, including storyboarding and collaborating with artists. Copies of both the original novel and the graphic novel are available at the Free Library of Philadelphia.

Teen programming at the Field Teen Center is made possible in part by grants from the Philadelphia City Institute Board of Managers and the Independence Foundation.