All the Historic Black Newspapers Available Online With Your Library Card 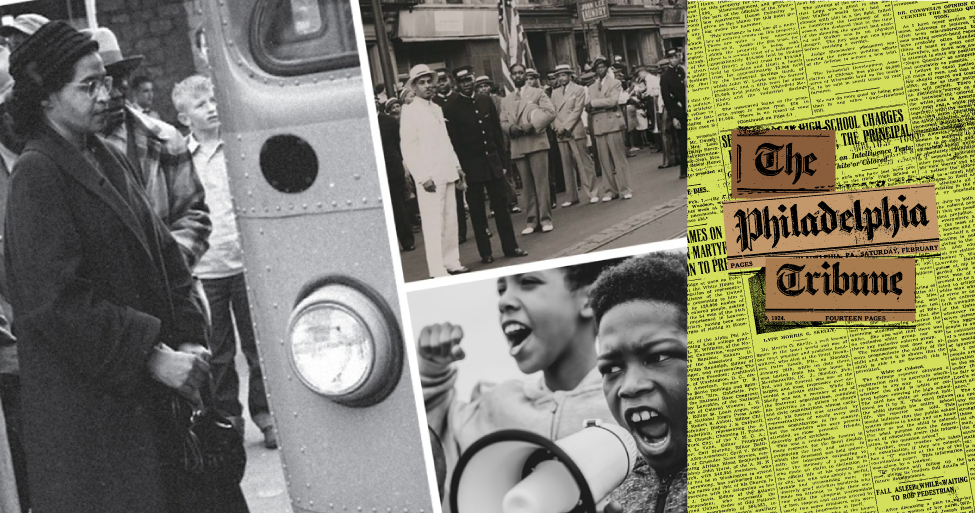 What better way to learn about Black history than through the lens of Black news sources, as written and published by the African American journalists of yesterday? The Free Library is pleased to highlight a digital resource that provides access to the most distinguished Black newspapers in the United States. Cardholders currently have access to 11 historic Black newspapers that help piece together a fuller story of American history, which features stories omitted from textbooks and mainstream newspapers. These collective sources span generations of important historical events and editorial perspectives from 1893 all the way to 2010, featuring both local and national news coverage of the Civil Rights Movement, as well as other important historic developments.

ProQuest describes the collection as providing "unprecedented access to perspectives and information that was excluded or marginalized from mainstream sources." The content includes primary sources like articles, obituaries, photos, editorials, and more, and is easily accessible to students, researchers, and anyone who wants to learn more about the history of race relations, journalism, local and national politics, education, African American studies, and more. With coverage of the first Black White House correspondent and stories of the cultural explosion of the Harlem Renaissance, to Philadelphia-centric events, like police brutality under Mayor Frank Rizzo, the murder of Octavius V. Catto, and the emergence of Philadelphia soul, these publications "reveal history as it was being made, by the people who experienced it."

More about these newspapers:

The oldest continuously published daily Black newspaper in the U.S., The Philadelphia Tribune was founded by Christopher James Perry. His paper conveyed ideas and opinions about local and national issues affecting Black people in the post-emancipation period, and today continues to serve the country’s fourth-largest African American community. The Philadelphia Tribune campaigned to appoint Black citizens to the board of education, city council, and the judiciary. It actively supported the growth of the United Way fund and launched a "clean block" program, promoting the health, safety, and well-being of the city’s residents. The newspaper fought against segregation and rallied against the race riots in Chester, Pennsylvania. Access nearly 90 years of news written by and for African Americans.

W.A. Scott II founded the Atlanta Daily World at a time when most Black Americans lived in the South. He felt that “the race problem” could only be solved in the South, which required an informed community. Rather than reading news about African Americans “through the optics of a host of prejudiced white papers,” he launched his own newspaper to educate, inspire, uplift, and promote the expression of the Southern Black community. Follow first-hand coverage of the infamous Scottsboro Case; read reviews of Richard Wright’s best-selling protest novel, Native Son; witness the fight for civil rights from a Black, Southern perspective; and more through this historically important newspaper. Home to the first Black correspondent assigned to cover the White House, this newspaper continues to inform the Atlanta metropolitan community and beyond. More than seven decades of this newspaper’s historic coverage, online and easily searchable, is available from this database for both researchers and readers.

Founded by former slave John Henry Murphy, Sr. when he merged three church publications, The Baltimore Afro-American became one of the most widely circulated African American newspapers on the Atlantic Coast. In addition to featuring the first Black female reporter (Murphy’s daughter) and female sportswriters, the paper’s contributors have included writer Langston Hughes, intellectual J. Saunders Redding, artist Romare Bearden, and sports editor Sam Lacy, whose column influenced the desegregation of professional sports. Through the decades, the newspaper fought for equal employment rights, urged African American participation in politics, and advocated state-funded higher education for Black people. In the 1930s, The Afro-American launched "The Clean Block" campaign, which is still in existence today, to clean up inner-city neighborhoods and fight crime. The paper stationed correspondents in Europe and the Pacific during World War II, providing first-hand reports to readers. In the 1950s, working with the National Association for the Advancement of Colored People (NAACP), the newspaper’s efforts contributed to the outlawing of public school segregation. To see history being made, start here.

The Chicago Defender has been a leading voice of the Black community well beyond the Windy City, with more than two-thirds of its readership outside Chicago. The newspaper was a proponent of The Great Migration, the move of over 1.5 million African Americans from the segregated South to the industrial North from 1915 to 1925. It reported on the Red Summer race riots of 1919 and editorialized anti-lynching legislation and the integration of Black people into the U.S. military. This newspaper also supported the aviation career of Bessie Coleman, the first African American female pilot, and promoted the writing of Langston Hughes, a poet and leader of the Harlem Renaissance, and Gwendolyn Brooks, poet laureate of Illinois. Over six decades of this newspaper’s historic coverage is available online and easily searchable for both researchers and readers.

Editor William O. Walker used his newspaper to rally the masses in support of equal rights, much as civil rights leaders would decades later. In the 1930s, the Cleveland Call and Post called upon the local community to support the Scottsboro defendants with letters, clothing, stamps, and cigarettes. It also encouraged donations to the defense fund for the innocent youths, reminding its readers that the freedom of nine Southern Black boys wasn’t all that was at stake — so were the rights of all Black Americans to a fair jury trial. Through his newspaper, Walker also promoted participation in politics, urged the establishment of legal aid societies by the African American community, and encouraged Black solidarity and self-reliance. Today’s researchers can explore 57 years of the Cleveland Call and Post online.

From its earliest beginnings when it urged African Americans not to “spend your money where you can’t work,” the Los Angeles Sentinel has exposed prejudice, promoted social change, and empowered the Black community. By accessing more than 70 years of cover-to-cover reporting, today’s readers view the Depression through the eyes of African Americans in the 1930s. They can follow the grassroots struggle against the racially restrictive housing covenants of the 1940s. Researchers can follow Roy Wilkins’ column, “The Watchtower,” and see how he attacked efforts to label civil rights activists as “communists” during the Cold War. Today, this independent publication continues to cover community and world issues from the unique cultural perspective of the Los Angeles African American community.

The Louisville Defender is a weekly newspaper and has been one of the main Black newspapers in the local Louisville area, and is an excellent source for coverage of issues affecting African Americans. The newspaper played an integral role in the fight for integration in the 1960s. Frank L. Stanley, Sr., who was senior editor and publisher for the paper for 38 years, was also a civil rights activist who worked on Senate Resolution no. 53 in 1950, which focused on the integration of higher education in the state’s public universities. He later wrote another bill that created the Kentucky Commission on Human Rights. His column, “Being Frank,” became nationally syndicated in the 1940s. This paper has hosted the annual Louisville Defender Black Expo, now known as the Louisville Defender Newspaper’s Minority Consumer Expo, since the 1930s. The event celebrates Black culture and is one of the oldest Black expos in the country. Follow first-hand coverage on Martin Luther King, Jr., integrated public accommodations, equal job opportunities, desegregation, local protests by civil rights leaders, student protests, Muhammed Ali, police violence such as the murder of Desmond Rudolph, Angela Davis, and much more.

The Michigan Chronicle was founded in 1936 by John Sengstacke, the owner of the Chicago Defender, and has continued to be a leading voice for Black people in Detroit and beyond. Its longtime editor, Longworth Quinn, became a leader in Detroit’s African American community, business, and church groups in the 1940s, solidifying the Chronicle’s position in the community. Early on the paper gained national attention for what was viewed at the time as its radical point of view by supporting both organized labor and the Democratic Party. Michigan Chronicle played a pivotal role in civil rights of the 20th century including its involvement in negotiations at the Attica Prison Riots in 1971. It consistently reported on efforts of Black citizens to better themselves in the 1950s and 60s as they integrated into Detroit neighborhoods. In 2001, the Chronicle took the lead in supporting Coleman Young, Detroit’s first Black mayor, and its relentless reporting on violence against African Americans. The Chronicle was tremendously instrumental in uncovering abuses by the Detroit police department and its use of STRESS, the controversial undercover unit that resulted in 23 young Black men being killed — most of them shot in the back. Many people credit the Chronicle for exposing the abuses and overturning STRESS’s appalling four-year run.

From an initial $10 investment, the New York Amsterdam News grew to become one of the nation’s leading Black newspapers and one of New York’s most influential Black-owned institutions. For nearly a century, it has helped influence and promote the causes and aspirations of African Americans. Contributors have included W. E. B. Du Bois, Roy Wilkins, Adam Clayton Powell, Jr., and Malcolm X. The New York Amsterdam News captured the vibrancy and cultural richness of the Harlem Renaissance in the 1920s, advocated for the desegregation of the U.S. military during World War II, and fought against discriminatory employment practices and other civil rights abuses in the 1960s. More than 70 continuous years of cover-to-cover news from this remarkable publication is available online now.

Under the leadership of P.B. Young, the "Dean of the Negro Press," The Norfolk Journal and Guide became one of the best-researched and written newspapers of its era, with a circulation of more than 80,000 by the 1940s. It argued against restrictive covenants, rallied against lynching, encouraged Black people to vote, supported improvements to city streets and water systems, and more. In contrast to other Black newspapers, such as the Chicago Defender (with which The Norfolk Journal and Guide is cross-searchable), this newspaper campaigned against The Great Migration of Southern laborers to the North. It was one of only a few Black newspapers to provide on-the-scene coverage of the 1930s Scottsboro trial and helped raise legal funds for the nine young Black defendants.

Urging African-Americans to actively participate in shaping their political destinies — and often leading the charge — the Pittsburgh Courier was once the most widely circulated Black newspaper in the U.S. in the early 20th century. The newspaper campaigned for increasing the number of Black physicians and opening a hospital to serve the Black community in Pittsburgh, where white facilities often refused to provide services. In the 1930s, the newspaper led a nationwide protest against the Amos ‘n’ Andy radio show and its advertisers because of the media’s offensive portrayal of African Americans. The publication’s “Double V” campaign during World War II demanded equal rights at home for Black soldiers risking their lives overseas. Through the decades, intellectuals and influential writers such as W.E.B. DuBois, Marcus Garvey, James Weldon Johnson, Zora Neale Hurston, and others have written columns or reported for the newspaper. For access to these writers and more, this database offers more than 90 continuous years of the Pittsburgh Courier online.

2 Comments | Add a Comment
Looking forward to being given my free library cards that I can leisurely access opportunities to read these historic papers and gain knowledge of our people through the lens of the journalist who wrote the stories.
Michele Russell - Bronx
I'm so proud that my Free Library has these resources. Hopefully they will always be available to FLP cardholders. #blackhistory365
Jamie - West Philadelphia