With the opening of the newly refurbished Shakespeare Park  directly across the street from Parkway Central, it seems fitting to highlight the Library's holdings related to the man himself.  The Rare Book Department is home to the first four folios of Shakespeare, the gift of P.A.B. Widener and his sister Mrs. Josephine Widener Wichfield, in memory of their father Joseph E. Widener  [This P.A.B. Widener is the grandson of the P.A.B. Widener who presented the library with his Copinger collection of Incunabula in 1899].

The First Folio was published in 1623 and contains Shakespeare’s collected plays, compiled by fellow actors John Hemmings and Henry Condell.  They include the comedies, histories and tagedies.  As was pointed out in a  recent New York Times article about an exhibition at the Folger Shakespeare Library, without this book we would have never known such plays as "The Tempest," "Julius Caesar," "Macbeth," "Twelfth Night," "As You Like It" or "The Winter’s Tale.”

The publishing history of the First Folio, printed by booksellers Edward Blount and father and son William and Isaac Jaggard, has become one of the foundations for the study of analytical bibliography. By comparing the extant copies of the folio in minute detail, bibliographers have been able to identify individual typesetters through their spelling habits and their use of worn and broken types.

The Widener gift of the first four folios was arranged by Philadelphia bookseller A.S.W. Rosenbach, who in his career handled six First Folios and even owned two boats, named "First Folio" and "First Folio II." There are thought to be only 232 copies of the First Folio in existence and the Free Library is fortunate to have one, which we believe to be in its original binding.

For more information, check out the British Library’s page on the first folio: http://www.bl.uk/onlinegallery/onlineex/landprint/shakespeare/index.html and the University of Victoria's digital facsimile: http://internetshakespeare.uvic.ca/Library/facsimile/overview/book/F1.html. 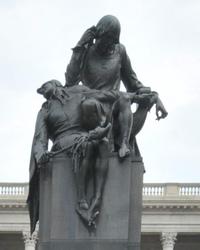