“The Perfect Fool” Lives On Part I

This past year, I had the privilege of processing and creating a finding aid for the papers of Ed Wynn (1886-1966), an actor, writer, and comedian from Philadelphia, as part of an internship requirement for Temple University’s graduate archives management program. I had not heard of the name Ed Wynn before I was assigned this project by Karin Suni, librarian and curator of the Free Library of Philadelphia’s Theatre Collection. Yet, after watching several YouTube clips of the comedian in film roles such Uncle Albert in Mary Poppins (floating in the air and shrieking, “I love to laugh!”) and the Mad Hatter in Alice in Wonderland (the character for which Wynn provided the vocals as well as the physical model for the cartoonists), I instantly recognized his wobbly voice, exaggerated lisp, and high-pitched giggle. It’s hard to forget.

Although I could have watched video clips of the wacky Wynn for days, I needed to learn more about his life before I could create a processing plan. The six boxes contained publicity photographs, newspaper clippings, postcards, letters, telegrams, notes, artwork, and other items such as a tiny Hebrew prayer book and a pair of worn suede, weighted gloves.  I consulted the FLP’s extensive Theatre Collection, the Internet Movie Database (IMDb), and the Internet Broadway Database (IBDb) for biographical information.  I discovered Wynn contributed far more to the history of Philadelphia and American theatre than just portraying whimsical characters in beloved Disney films.

Ed Wynn was born Isaiah Edwin Leopold on November 9, 1886, to Jewish immigrants, Joseph and Minnie Leopold. He attended Central High School before dropping out to pursue a vaudeville career in New England. He toured the country and eventually appeared on Broadway. Despite his rising success, he actively participated in the Actors’ Equity Strike in 1919 and was blacklisted by the prominent theater managers and producers in New York, including the powerful Schubert family. However, the resilient Wynn promptly wrote and staged his own Broadway productions, including  Ed Wynn’s Carnival (1920); The Perfect Fool (1921), the title of which gave him his subsequent nickname; The Grab Bag (1924); Manhattan Mary (1927); Simple Simon (1930; 1931);  and The Laugh Parade (1931).

Wynn invented and embodied zany characters such as “The Fire Chief,” and his performances blended slapstick comedy, props, and puns to entertain his audiences. For instance, he constructed an eleven-foot pole (for people he wouldn’t touch with a ten-foot pole).

As technology changed and newer mediums for entertainers emerged, he bravely tried his acts on radio and television and accepted comedic as well as dramatic roles in feature films. From 1949 to 1950 he hosted the variety program, The Ed Wynn Show, on CBS. This was the first network television show broadcasted via kinescope from Hollywood to the East Coast, one week after each episode aired. Wynn died of cancer on June 19, 1966 in Beverly Hills, California; the epitaph on his tombstone simply reads, “Dear God, Thank you.” (For more on Wynn’s personal and professional life, including his television and film credits, please see the biographical note in the finding aid.)

Wynn as the Mad Hatter 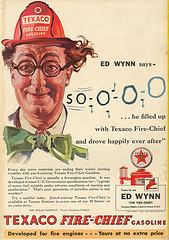 The Fire Chief
2 Comments | Add a Comment
Your timing couldn't be better! I'm giving a talk on Wynn in a couple of weeks at the Great Neck library. So great to know about your resource. You may be getting a call from me shortly!
Trav S.D. - New York
Great common sense advice even for someone approaching their mid-life crisis.
filmulete