Tonight's opening of Paint The American Eagle marks the Free Library's first foray into hosting and co-producing a production for the Philadelphia Fringe Festival.  The partnership with local playwright and producer Reuben Wade is particularly fitting for the 2012 festival as the staged reading of this play is a new type of event in our popular Year of Dickens celebration.  While the show is based on Charles Dickens's American Notes, a travelogue of his journey to North America in 1842, it isn't simply a recap of what Dickens wrote; instead, it looks at the trip and his observations from the viewpoint of his wife Catherine.  And we aren't the only ones excited about the production.  Stage Magazine named it one of its top 15 picks of the festival.  Uwishunu's Fringe Festival Roundup picked it as one of the top free performances, and an article about the playwright and producer appeared on the Fringe Festival blog.

This is a chance to celebrate Dickens, the Free Library, and the Philadelphia Fringe all at once and for free.  Tickets are still available for all three performances, and groups (schools, book clubs, seniors, etc.) are strongly encouraged to attend on Wednesday afternoon.  While walk-ins are more than welcome, but making a reservation in advance will guarantee your spot in the audience.  For more information on the show and to reserve tickets, visit Paint The American Eagle on the Fringe Festival website. 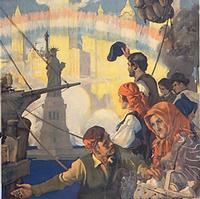