Transcending Their Boundaries: The Children of Terezin 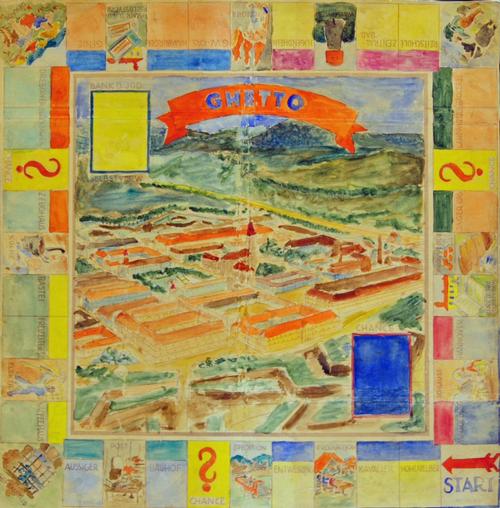 The Free Library of Philadelphia is honored to host a special exhibition from the Philadelphia Holocaust Remembrance Foundation that highlights the power of the human spirit even in the face of egregious atrocities.

In 1941, Hitler and the Nazis opened an internment camp in Terezin (also known as Theresienstadt), Czechoslovakia.  According to the Jewish Virtual Library, 97,297 of the Jews imprisoned in Terezin died.  Of those that died, almost 15,000 were children.

The exhibition “Transcending Their Boundaries:  The Children of Terezin” is more than an acknowledgement of the viciousness of the Nazis.  It is a celebration of the lives of the Jewish men, women and children who were confined at Terezin.  Through the pictures, games, and toys that the children and their teachers made during their time there, the spirit of the people shines through.

Please join the Free Library community at the opening event featuring the film “Liga Terezin” on Wednesday, September 12, 2012 at 7:30 p.m. in the Montgomery Auditorium at the Parkway Central Library.  The exhibition is installed on the ground floor in front of the auditorium and runs through November 20, 2012.

As the exhibition features the artwork of the children of Terezin, our librarians have prepared a special booklist to help you should you wish to share information with your children regarding Terezin and the Holocaust.  These books, and many others, are all available in the Parkway Central Children’s Department.

Rubin, Susan Goldman. Fireflies in the Dark: The Story of Friedl Dicker-Brandeis and the Children of Terezin. (call # j940.5318 D558r)

5 Comments | Add a Comment
I am disappointed that you did not include my first book I AM A STAR ---Child of the Holocaust all about Terezin published by Penguinand it is in 8 languages, and considered a CXLASSIC today in the USA and in Germany. I would love to give a program at your library --have many doc. films about my life , especially about the doll with whom I survived as a 10 year old THE OLYMPIC DOLL she was made for the 1936 Olympics. I have written 6 books, and habeen published in 9 languages. Best regards www.ingeauerbacher.com Inge Auerbacher
Inge Auerbacher - Jamaica, N.Y.
Ms. Auerbacher, I am sorry that your book was missed. I only looked at the books that were currently on the shelf in the Central Children's Department to do a very brief book list. I have pulled your book from another collection and have shared your comment with the administration.
Gabrielle -
Lenny Gerson - Portland, Oregon
The husband of the late author asked that I contact you. May I suggest you add the following title to your book list. Nesarim: Child Survivors of Terezin by Thelma Gruenbaum ISBN: 9780853035114, paperback Publication date: 2004 Vallentine Mitchell Publishers Distributed in North America by International Specialized Book Services, isbs.com I thank you for your time and consideration. Sincerely, Lenny Gerson International Specialized Book Services Portland, Oregon www.isbs.com lgerson@isbs.com (800) 944-6190
Lenny Gerson - Portland, Oregon
Mr. Gerson, I have let the administration know of your suggestion.
Gabrielle -