Labor Day weekend is here and with it the end of another summer. A long holiday weekend is on tap for most of the country, but few of us nowadays may know or remember exactly why we have off on Monday.

Let's take A History Minute, and find out some information and facts about Labor Day, some directly related to Philadelphia:

You can find more information on Labor Day and related topics such as "labor movement", "law and legislation", "employment", and "wages" by browsing our online catalog or by visiting our Social Science and History Department.

The Free Library system will be closed on Monday, September 2nd in observance of the Labor Day holiday, but as always, you can access content online via our website.

The blog will be back next week, ready for the beginning of the school year, the start of the football season, and tons of great Free Library events going on throughout the fall! 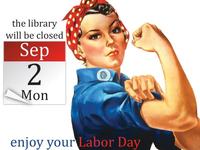