Up Next! Anwar Marshall

On Monday, February 9 at 7:00 p.m., audiences at the Montgomery Auditorium at the Parkway Central Library will have an opportunity to welcome drummer Anwar Marshall and his band to the stage. Marshall is co-leader of a ten-piece ensemble called the Fresh Cut Orchestra who plays regularly semi-regularly at the Painted Bride Art Center and the Kimmel Center. In addition, he has collaborated with musicians such as Dave Douglas, Orrin Evans, Tim Warfield, Duane Eubanks, Jaleel Shaw, and Robert Glasper, among others.

To hear recordings, both live originals from Montgomery Auditorium or previously released recordings [from our streaming music services] of established jazz classics that these musicians are re-imagining, check out previous blog posts announcing concerts in September, October, November, December, and January.

On Monday, January 12 a large audience of over 100 music lovers braved the rain and winter chill to bask in the melodious warmth of Montgomery Auditorium to hear Dan Hanrahan’s guitar. Organist Chris Simonini and drummer Kevin Ripley richly contributed to this plush sound. The trio kicked off their set with an interpretation of Buddy Montgomery’s “Bock to Bock” written for his brother Wes’s band. [Library card holders may need to log into our streaming music services with their PIN first]

They then moved on to two of Dan’s original compositions: “Three Colors” and “Good Luck”

Artfully, Dan’s Trio offered us Ellington’s “Prelude to a Kiss” as a prelude to his own touching composition for his father, “Blues for DGH”.

Finally, the evening ended with an interpretation of Sonny Rollins’s “Airegin”.

To hear more from Dan, read this interview with the Philadelphia Jazz Project. 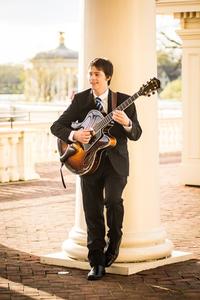