Last Thursday, the new South Philadelphia Library took a big step toward its opening, as an exciting piece of the puzzle was completed with the installation of the Maurice Sendak Chertoff Mural.

Moving from its previous home at the Rosenbach, the mural will be a focal point at the newly built structure at 1700 South Broad Street, where the library will occupy the bottom floor of the brand new Health and Literacy Center supported by the Children’s Hospital of Philadelphia (CHOP). The only surviving mural by renowned late author and illustrator Maurice Sendak features a parade of children and animals, some of whom would come to be familiar in Sendak’s children’s book illustrations, including the beloved Where the Wild Things Are.

The mural is pencil and water-based paint on plaster, measuring 48 inches by 120 inches and weighing 1,400 pounds. Conservator Catherine Myers added the finishing touches Thursday before the mural was unveiled before media members and library officials. 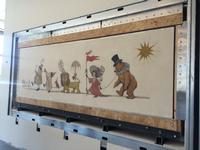 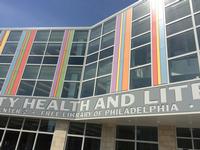 The facade of the soon-to-open Health and Literacy Center, which houses the new South Philadelphia Library
Add a Comment