How can literacy be used for social change? At the recent International Literacy Association conference in Boston, this question was addressed at an impromptu session for literacy specialists and coaches. Recent tragedies, such as the shootings of Alton Sterling and Philando Castile, as well as the Dallas police shooting, and the subsequent Black Lives Matter movement led to the creation of the session, during which attendees learned strategies to approach difficult topics in the classroom. Teachers may find the following tips useful in the classroom. Parents and caregivers can modify the advice to introduce difficult conversations at home.

Start small.
Discussions don’t have to start with large-group or whole-class talks. Set up the large discussion by having students break into pairs. Then combine for a group of four, then eight, and so on, until the whole group is in a discussion. This is particularly useful when a class has little experience with large-group discussions.

Start easy.
You don’t need to start with the hard stuff right away. Set up for a successful dialogue by having pairs first talk about something mundane. Provide specific questions or tasks for each partner to consider while they are talking.

Moderate effectively.
While we spoke in groups of eight, two moderators walked around the room taking notes on the discussions. Specific comments or thoughts were brought up to the whole group. This was especially useful as the group was getting used to each other and talking about more difficult topics, for the moderators could initially control the topics discussed.

Be kind.
These were the most important words of the session. The lead moderator in this session stayed off to the side so we could address each other, and he told us he would only intervene when he felt there was unkindness.

Know when to take a break.
As more people shared their thoughts, more hands went up. The session leader told us that at this point, we were most likely not listening anymore, but focusing on what we wanted to say. After four people spoke, we took a 15–20 second break to process what was just said.

Build trust early on.
Make the classroom environment a safe space before tragic events happen. One of the keys to a rich discussion is feeling comfortable in your surroundings to talk about events. Trust with adults is important as well. Build trust between you and your students’ parents early on.

To read more about this session, including the activities we participated in, check out the article "Empowering Educators With a Model for How to Moderate Difficult Conversations in the Classroom" from Literacy Daily. 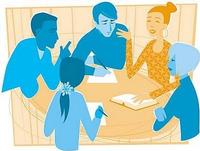 Classroom Conversation: How can literacy be used for social change?

Social Change Will Save The World
2 Comments | Add a Comment
I can not thank you enough for adding a "Black Lives Matter" section. Though I am part black, I have been feeling disconnected/ignorant of my black culture and history. These beautiful lists of books can help me and others better sympathize and feel more passionate about Black Lives Matter. It's only a click away from the front page. Thank you for this convenience and spotlight.
Anonymous
Thank you for your comment! We're very happy that you've found this useful - please let us know if you get a chance to read any of the books or visit any of the websites. Good luck on your cultural rediscovery! If you need assistance or advice, let a librarian know. We are always willing to help provide book, article, movie or electronic media suggestions. I hope you'll keep checking back periodically - We're adding new links and information whenever we can.
Chris - Free Library Staff - Free Library of Philadelphia