The Free Library of Philadelphia and the Philadelphia Jazz Project invite you to a third season of free concerts: Mysterious Travelers 3: Internal Investigations. This time we’re turning inward to explore, through sound, the collections that constitute the Parkway Central Library. Every third Monday from September 2016 through May 2017, emerging and veteran musicians, all calling Philadelphia home, will debut new works. This season, our librarians sat in on the compositions: Musicians met with librarians just like our city’s students do, except not with term papers as the goal, but new artistic expression. Librarians steered musicians toward inspiration within the Free Library’s world class collections, band leaders responded, and these reference jam sessions surged to life. We’re thrilled for you to hear the results of these shared intellectual and musical improvisations. Join us this season for librarian jazz! 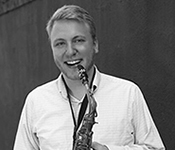 Mysterious Travelers Featuring Chris Oatts
Monday, September 19, 2016 7:00 p.m.
Hailed by saxophone icon Bobby Watson as “one of the top young saxophonists of his generation,” Chris Oatts has a forward-thinking sound on the saxophone. With deep roots in jazz and bebop, Chris’s original compositions embrace influences of rock, funk, classical, and New Orleans. Chris’s quartet performs regularly around the Philadelphia area, playing a wide collection of original songs and new arrangements of jazz classics. Chris is also the founder and musical director of the South Philly Big Band, a group steeped in the tradition of Thad Jones and Mel Lewis that commissions new works from Philadelphia composers. Chris has played with Terell Stafford’s Jazz Orchestra of Philadelphia as well as the Vanguard Jazz Orchestra and is an original member of Chelsea Reed and the Fair Weather Five, a Philadelphia swing-era band that consistently records and tours the country. 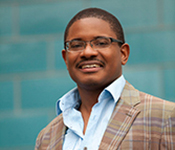 Mysterious Travelers Featuring Brent White
Monday, October 24, 2016 7:00 p.m.
Trombonist and Philadelphian Brent White has toured the globe with the likes of Roy Ayers, John Legend, Kindred the Family Soul, and the Sun Ra Arkestra. He has performed with Zap Mama,Orrin Evans, Harlem Renaissance Orchestra, and Fresh Cut Orchestra, and he has recorded with Patti Labelle. A fixture of the scene at Ortlieb’s Jazzhaus in the past and across Philadelphia and New York today, Brent is a master of his instrument and fluent across a variety of styles. So much so that the legendary Mickey Roker has been heard exclaiming: “You got it, Brent … that sound!” 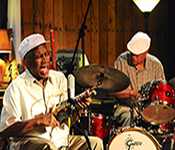 Mysterious Travelers Featuring Kuni Bi/Ed Stokes and Tom Lowery
Monday, November 21, 2016 7:00 p.m.
Papa Ed Stokes (a.k.a. Kuni Bi) is a multi-instrumentalist/vocalist who plays more than a dozen instruments, including the Kamale Ngoni, a stringed African harp, and the Ngoni, a stringed African lute. One of his primary instruments is the Diddley Bow, or “One-String,” which has its origins in West Africa—where he studied in 2013. He is also a highly accomplished instrument maker (often from recycled materials) and a lifelong student of ethnic and African music and the Blues. Papa’s main goal is to keep these African-influenced musical traditions alive and make people happy. Tom Lowery is an accomplished drummer from Philly known for Latin/Brazilian hand drumming and ably manning the drum kit. Bassist Bert has often performed at The Blues Stroll and Jazz by Night, and on New Year’s Eve he locks down the rhythms of Philly Gumbo at The Ball Drop on State Street. 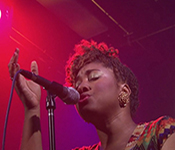 Mysterious Travelers Featuring Alexis Simmons
Monday, December 19, 2016 7:00 p.m.
Alexis Simmons (a.k.a. Alexa Gold) has made love a fine art through her music. She has nurtured her talent within the demanding Philadelphia music scene and has exploded all over stages on the East Coast. Her live shows incorporate her love and skill in R&B/soul, pop, house, and rock, and she credits her versatility to her work as a background singer, most recently for hip-hop/soul singer Jaguar Wright. She also developed an ear and style for dance music; writing and performing singles such as the popular “Selene—The Goddess of the Moon”; co-producing her first independent album, called “The Art of Seduction”; serving as sole music producer for alternative performance trio The Femme-mynistiques; and working on her latest EP. Her love of music is also exhibited through her photography, capturing experiences ranging from portraiture to theatrical performances and community gatherings. 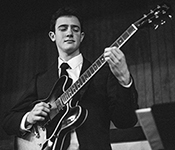 Mysterious Travelers Featuring Jake Kelberman
Monday, January 23, 2017 7:00 p.m.
Jake Kelberman is a young guitarist, composer, and educator based in Philadelphia. He is a graduate of the Jazz Studies program at Temple University’s Boyer College of Music, where he studied under musicians Terell Stafford, Dick Oatts, Greg Kettinger, Bruce Barth, and Ben Schacter. Kelberman has toured throughout the United States and Europe and has performed at venues around the world such as Dizzy’s Club Coca Cola at Lincoln Center in New York, The Kimmel Center in Philadelphia, and the Bimhuis in Amsterdam, where he was a finalist in the “Keep an Eye” Jazz Competition in both 2013 and 2014. He has performed with noted artists such as Jim Snidero, Walt Weiskopf, Arturo Stable, Deana Martin, Joe Bwarie, Gordon Webster, and Michael Gamble. Jake resides in Philadelphia and maintains a busy performance schedule. 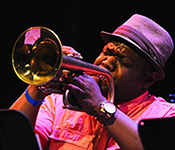 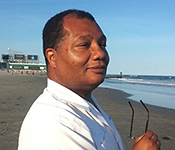 Mysterious Travelers Featuring Howard Tucker
Monday, March 20, 2017 7:00 p.m.
Howard “SERGIO” Tucker’s music embodies cultural fusion. He has his finger on the Brazilian poetry scene and the right words on the tip of his tongue. Regularly performing in various spaces—Brazilian lounges, black jazz joints, soul clubs—he proudly delivers his gospel of love with R&B/Bossa Nova/Samba rhythms. His audience nods in approval when they hear his real-talk delivery of phrases like, “Doesn’t matter, the salsa has taken over.” He has put these words to paper, compiling a book of poetry, Sergio: A Poet Witness to the City. 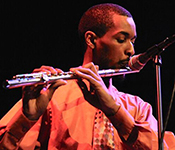 Mysterious Travelers Featuring Elijah Thomas
Monday, April 17, 2017 7:00 p.m.
Elijah Thomas is a Philadelphia native and avid performer in the Philadelphia and Tri-state region. He is a graduate of the Esther Boyer College of Music, with a Bachelor of Music degree in Jazz Arranging and Composition and an instrumental concentration in flute, and is currently enrolled as a graduate student at the Boyer College of Music and Dance, pursuing a Master of Music degree in Music Education. He also serves as co-director of the Jazz Workshop at the Community Music Scholars Program of Temple University Music Preparatory and is a teaching artist for Tune-Up Philly!, the musical instruction community outreach division of the Philadelphia Youth Orchestra. 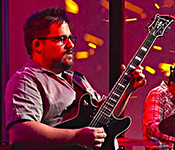 Mysterious Travelers Featuring Ross Bellinoit
Monday, May 22, 2017 7:00 p.m.
Ross Bellenoit has racked up impressive credits as a guitarist, composer, and producer. After moving to Philadelphia in 2003, Bellenoit quickly became a leading axe-man. He has been making his mark as a songwriter and a recording producer and arranger. He trained on classical guitar for 10 years (and viola for five) before studying jazz guitar at the University of the Arts.

All concerts start at 7:00 p.m. and will be held in the Montgomery Auditorium.

You can also download our program guide for this latest Mysterious Travelers series of events.

The Philadelphia Jazz Project (PJP) works to inspire a network to support, promote, archive, and celebrate the diverse elements within the Philadelphia jazz community, with the larger goal of connecting to the global community.

Accessibility: A wheelchair ramp is located at the Library’s Wood Street entrance, and an elevator for the public is located next to the building’s northeast courtyard. For more information, full biographies, and the most up-to-date details, visit freelibrary.org or call 215-686-5316.