This week, as we join the American Library Association (ALA) in recognizing Banned Books Week, we are reminded that the Free Library of Philadelphia—and all public libraries—serves as a beacon of informational freedom in the communities we serve. Our institution’s mission to advance literacy, guide learning, and inspire curiosity in Philadelphia is based on the notion that individuals must be free to learn and explore, and that includes choosing what to read.

In preparation for this week, Free Library of Philadelphia staff members have spent time reflecting on the frequently banned or challenged books that mean something to them personally. Without the freedom to read what one pleases, we may have missed out on books, like these, that have long inspired us.

Mary W., children’s librarian: I was never much of a reader growing up. I only read the books that teachers assigned during elementary school. All that changed in 11th grade when my English teacher handed me a copy of J.D. Salinger’s The Catcher in the Rye. I couldn’t put it down. Not only was I allowed to read about teenage angst, along with some mild cursing, but I was then asked to talk about how I related to Holden. When you’re a teen and an authority figure actually wants to know your thoughts and feelings on anything, it’s a huge deal. We then moved onto Shakespeare and Dickens and Austen. I haven’t stopped reading since.

Samantha M., communications coordinator: Fun Home by Alison Bechdel expertly uses text and visuals to go beyond what the typical graphic novel does (although in this case, it’s a memoir). In describing her own childhood, relationship with her parents, and coming-out story, Alison is analytical, hilarious, and heartbreaking. The story itself, craft of the execution, and unique perspective it offers the reader together make Fun Home a truly eye-opening and revelatory read.

Peter S., web editor: Censorship is unfortunately nothing new when it comes to the realm of comic books and sequential art. Starting back in the 1950's, Fredric Wertham's infamous book Seduction of the Innocent fabricated evidence and used scare tactics to blame comic books for the perceived increase in juvenile delinquency at the time. The book caused such a moral panic that a U.S. Congressional inquiry into the comic book industry was launched, leading to the formation of the Comics Code Authority, which was in and of itself its own form of censorship on publishers, creators, and readers. The Ten-Cent Plague is a good read for further information on this topic. As of 2011, no comics publishers are currently using the CCA to rate or approve content, yet graphic novels and comics are still being challenged and banned for their content from communities to schools to even—yes—libraries (sigh). Other graphic novels that have been challenged or banned in recent years include Fun Home by Alison Bechdel (reason challenged: sex/nudity, LGBTQ themes); Persepolis by Marjane Satrapi, a recent One Book One Philadelphia selection (reason challenged: profanity, violent content); Stuck Rubber Baby by Howard Cruse (reason challenged: LGBTQ themes and race relations); Bone series by Jeff Smith (reason challenged: promotion of smoking and drinking); and even Neil Gaiman's acclaimed Sandman series (reason challenged: anti-family themes, offensive language, and unsuited for age group).

Mike B., director of foundation relations: My banned book is James Joyce’s Ulysses. As a teenager, I wanted to read Ulysses because I heard it was really difficult. When I got into it, I found that it was the most honest book I had ever read, and I found elements of myself reflected in it that I didn’t think I shared with anyone else, least of all a long-dead Irish novelist. It showed me how a great work of art can make you feel less alone.

Kalela W., One Book One Philadelphia program coordinator: The Crucible by Arthur Miller is a book that I come back to every few years. As a piece of literature it’s a study in conflict: the community’s conflict with this dangerous land they have newly settled; the characters’ conflicts with each other in a complicated theater of politics and economics; and of course, the inner conflict that other characters, such as John Proctor and John Hale, struggle to come to terms with. And from a historical angle, as well as from a feminist lens, The Crucible is fascinating, but often maddening and unnerving. As he is being executed by having large stones placed upon his chest, the character Giles Corey utters “More weight.” I find this to be a metaphor for the layers of heaviness, and complexity, in this classic piece.

Alix G., assistant VP, external affairs: For me, it’s The Sun Also Rises by Ernest Hemingway. This is the book that put Hemingway—and the Lost Generation—on the map. It showcase’s Papa’s singular, spare style so beautifully that to ban it is a total literary travesty. What I love most is the way it delivers a slap in the face (or, I suppose since it’s Hemingway, a pop in the jaw) to the bearers of false nostalgia—those who think the ‘20s were one big, glamorous party. According to Hem, the liquor may have been flowing, but the excess of the Jazz Age, propelled by the shock of World War I, left devastated friendships, destroyed romances, and a directionless group of 20-somethings in its wake. The pain, the longing, the confusion comes screaming through on every page. To cap it off, The Sun Also Rises has one of the greatest final lines in all of literature, with Hemingway perfectly encapsulating the juxtaposition of a lost, yet wistful, generation: “Isn’t it pretty to think so?” Oof. Plus, there’s bullfighting!

Link R., librarian: Fun Home by Alison Bechdel was one of the first books I read that normalized queer experiences and humanized queer characters. This memoir graphic novel is about coming out, grappling with evolving identities, and family dynamics. The copy of Fun Home I first read was tattered and loved as it was passed between my friends, many of whom, like Bechdel, were navigating the messy process of coming out as queer. Fun Home acts a testament to how coming out can save your life, which was an immeasurably powerful lesson for me. Since its release in 2006 it has been contentious in many libraries, including within the past year at Duke University where students claimed the book was pornographic and compromised their moral beliefs. The characters in Fun Home are nuanced, sympathetic, and human, perhaps exactly the representation those who oppose the book need to see.

Sara D., manager of marketing and communications, the Rosenbach:
Their Eyes Were Watching God by Zora Neale Hurston was nearly banned at a Virginia high school due to obscene content. The culprit: a vivid description of bees pollinating the creamy white flowers of a pear tree, observed by the main character Janie, who perceives the bees and flowers as a symbol of marital union. I was in high school myself when I first read this novel, and I didn’t quite catch on to the suggestive overtones. But the pear tree scene is rich with sensory description and allusions to an almost religious experience: as Janie lies beneath the tree, “soaking in the alto chant of the visiting bees, the gold of the sun and the panting breath of the breeze,” she is visited by the “inaudible voice” of a revelation. I understood that Janie’s rapt admiration of the pear tree is of a piece with her lifelong search for beauty and joy—a quality of her unquenchable spirit that buoys her through abuse, poverty, and heartbreaking loss.

Julie B, writer & editor: One Flew Over the Cuckoo’s Nest was one of the few books that really gripped me in high school—it was a ‘classic’, but it was funny, raw, and eye opening. Having also taught it to 11th-grade students in Philadelphia, and seeing this classic come alive for them in a way their assigned literature often doesn’t, made me further fall in love with it. It has been challenged in schools for its use of obscenity and descriptions of so-called violence that could “corrupt juveniles.” It does just the opposite though! It awakens students, and all readers really, to power dynamics, manipulation, and the difficulties of challenging authority. It is the best!

Amber M., director of development operations: I never experimented with drugs when I was younger due in part to my experience reading Go Ask Alice in middle school. While the themes were arguably too mature for my age, my favorite librarian hooked me up with the book (amongst others that were being banned at the time), as she was an avid believer in the freedom to read. I deeply appreciate her giving me access to these types of stories, as it allowed me to be exposed to the sad realities of things like drug use and sexual assault without going through the pain of experiencing them first hand. I was able to live vicariously through characters such as Alice and others and decide which experiences I could skip in my real life. The lessons learned from my fictional peers were much more powerful and effective than any I got from parents or other real-life authority figures.

We hope our choices inspire you to read the books you choose, on the topics you choose, and know that the Free Library is always here to support your freedom to do so.

For more information on Banned Books Week, visit the American Library Association’s page of resources. You can also participate in the ALA’s Virtual Read-Out in support of the cause. Two organizations you can look into and support in the fight against comics- and graphic novel-related censorship, specifically, are We Need Diverse Books and The Comic Book Legal Defense Fund. The CBLDF publishes a yearly informative Banned Books Week Handbook, which is a must read.

Be sure to follow the Free Library on social media this week as we share additional banned-books content, and if you want to join the conversation, don’t forget to use the official #BannedBooksWeek tag and let us know what banned book you’re reading! Selfies always encouraged! 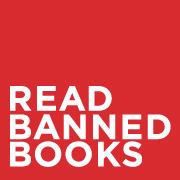 The Free Library of Philadelphia's mission is centered on the freedom to read.
2 Comments | Add a Comment
No book should be banned
Bob bergquist - Lots angeles
We agree, Bob!!
Kate C.