The "King of the Monsters" roars back onto movie screens next week when Shin Godzilla (a.k.a. Godzilla Resurgence) premieres for a limited-run of U.S. screenings October 11 - 18. The film is the first new entry in the Godzilla mythos in twelve years from the legendary Toho Studios, who have created 28 films starring the big green guy, starting with the groundbreaking and now Criterion Collection-preserved Gojira in 1954.

The plot this time around? An unknown accident occurs in Tokyo Bay, which causes an emergency government cabinet to assemble. In the accident's aftermath, a giant creature appears, destroying everything in its path. I know, it sounds really familiar, but take a look at the trailer below...

As with the first Godzilla movie, this "rebooted" and "reimagined" version seems to rely just as much on monster mayhem while all the while tapping into the current climate of political paranoia around the globe, just as nuclear fears were at their height during the Cold War of the 1950s. Or, to put it more simply—Monsters as Metaphors.

Is that to say that you have to be enrolled in a Poli-Sci class to buy a ticket for this flick? Of course not! Part of the fun and escapism of any monster movie is kicking back and watching the melee unfurl before your eyes, whether you're cheering along or cowering behind covered eyes.

You've come along way over the past 62 years, Godzilla.

Even if you can't make it out to a movie theater next week, between the physical offerings of classic monster movies in our catalog and the great selection of movies and comic books streaming on Hoopla... we'll, you can still be as happy as Godzilla! 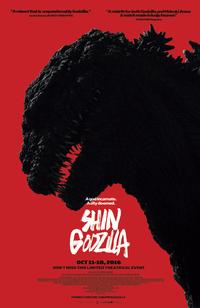