Some days are just "one of those days", am I right? I feel like this fall has been full of "those days", so instead of hurling myself off the nearest building, I like to indulge in one of my guilty pleasures—pastoral period dramas with a strong female lead. What would fall in to that category, you ask? I’d be ever so happy to tell you…

First and foremost, when I’m feeling a little bit down, I turn to (my hopefully soon-to-be bestie) Emma Thompson and her award-winning 1995 adaptation of Sense and Sensibility. I can lose myself in the bucolic beauty of the English countryside and, for a time, into the trials and celebrations of those Dashwood sisters. Did I mention the movie was directed by Ang Lee? So beautiful, you guys. So perfectly paced to get one out of a low-to-middling funk.

If it’s REALLY been one of "those days" and I’m feeling like there is a large storm cloud purposefully hovering over me, I turn to another British-y celebration of female friendship–Enchanted April. The first frames of the film take us to dingy, rainy, cold 1920s London and the put upon women who hustle around it. However, by the end of the film, we’re in a seaside Italian garden bursting with flowers and fantastic examples of the power of female friendship. I dare you—put this movie on some day when you are feeling gloomy and blue, and if you aren’t feeling a huge amount better by the end I’ll… well, I don’t know what I’ll do… but you can tell me your feelings in the comments!

When things are really bad—like REALLY, REALLY bad—I turn to the pluckiest Canadian orphan of all, Miss Anne Shirley. I don’t know if it’s her indefatigable attitude or the idyllic descriptions of a sylvan wonderland, but there is nothing short of mood stabilizers that gets me out of a deep, dark funk like reading Anne of Green Gables. If by some chance that’s not quite enough, the good news is that I can move on to Anne of Avonlea or Anne of the Island for a refreshing dose of kindred spirits, delightful descriptions, and pluckiness beyond compare.

So, those are my go to guilty pleasures for when I need to feel better! Have suggestions for me, should my beloved Sense and Sensibility DVD go missing? Leave them in the comments! 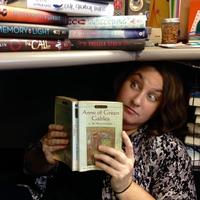 The author under her desk, sneakily reading "Anne of Green Gables"
2 Comments | Add a Comment
Hi there Rachel, #Same re: guilty pleasures of the very, very BBC-eque variety. All the more surreal while living in East Africa! I was filling out my ALA ballot and decided to check out your blog (just so everyone knows that there are those who read all the bios...). This post, which I read because of your photo under the desk, cracks me up because this adaptation of Sense and Sensibility is not only my grumpus go-to, but the soundtrack plays routinely in my house. And I had almost forgotten how much I love that Enchanted April movie. Pretty much perfection. And then I think about how much my daughter and I love Anne in any form. So, thanks for helping me remember that guilty pleasures love company too this morning and good luck with your Printz bid. Kind regards, Kim T-D Addis Ababa, Ethiopia
Kim Tyo-Dickerson, MS/HS Librarian at the International Community School of Addis Ababa - Addis Ababa, Ethiopia
Kim I have to tell you that you made my day. And thanks for being the person who reads the bios...hope I get to meet you in person someday and we can share other pastoral fiction that we enjoy!
Rachel F - Philadelphia