Historical nonfiction is all the rage. Erik Larson seems to have a spot reserved for him on the New York Times bestseller list; David McCullough is so much a household name, he’s verging on pop culture status; and everyone and his mother’s book club raved about Daniel James Brown’s The Boys in the Boat.

It’s almost trendy to be caught riding the subway with one of these gripping reads cracked open. People think of you as a reader who takes her history shaken and stirred with riveting narrative and meticulously-researched facts. Reading a book like one of these is like wearing a tweed jacket with leather elbow patches, but with one of those sleeves rolled up to show off your wrist tattoo of James Joyce’s dying words translated into Urdu—because you’re worldly and cool like that.

But while I like Doris Kearns Goodwin as much as the next girl, you know who I really like? Emilie Davis. Yeah, you never heard of her. She was a working class African American living in 19th century Philadelphia, and in the 1860s, when what literally was all the rage was the Civil War, she kept diaries. Her scribbles have been translated and annotated and are available for checkout from your friendly neighborhood Free Library of Philadelphia.

Let’s not forget the journals of Charlotte Forten Grimke, another 19th century black woman, but she belonged to a well-to-do abolitionist family. Grimke did many things in earnest. Notably, she taught former slaves in South Carolina, which was vital work. But like many Victorian women, she frequently indulged in mild illnesses—headaches, fatigue, that kind of thing—which oddly, she wrote about with almost a sense of accomplishment.

And there are also the diaries of Mary Boykin Chesnut, a real live Southern Belle who had conflicted views of the Southern cause and an acid tongue for gossip that would challenge any Mean Girl’s—but with class.

Finally, there are anthologies. Women’s Letters: America from the Revolutionary War to the Present has epistles by famous historical figures like Abigail Adams, Emily Dickinson, and Susan B. Anthony. But most of its letters are written by unknowns, women who connect with friends, husbands, family, lovers; sharing their thoughts and spilling their secrets. My favorite entries are letters by teenaged Sally Wister, who lived and flirted during the American Revolution. Having handsome soldiers staying in her family’s home, with their smart uniforms and spiffy white hair (she couldn’t resist a nicely powdered wig, she gushed to a friend), little Quaker Sally was all aflutter.

I won’t win any cool points reading primary source compilations like I Fear I Shall Never Leave This Island: Life in a Civil War Prison. People eye me weirdly on the subway—this isn’t hipster nonfiction. Also, who heads to work while casually flipping through first-hand accounts detailing the ravages of dysentery? But through reading old diaries and letters, in some ways, I’m encountering people I’ve never met. I’m learning about who they were, how they spent their time, what their deepest fears were, who they counted as confidents, and find that they enjoyed the same things that I do: eating a bowl of ice cream on a hot day, going to a fun party, and—who’d have guessed—diving into a good book. Yeah, these people are dead. But they lived. And when I read their words, I learn how different we really are not. 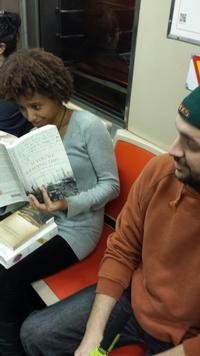 The author engrossed in some historical fiction while riding the subway.
1 Comment | Add a Comment
📚📚📚Charlette Forten Grimke📚📚📚
PhDrSeuss - Phila