#FLPMyths: So you thought Ben Franklin founded the Free Library…

While Benjamin Franklin is one of the prominent figures in our city’s history – doesn’t it seem like he’s there at every turn? – it’s actually a common misconception that he was the founder of our system.

Ben Franklin did, in fact, found a library in our city – the Library Company of Philadelphia – in 1731, but the important distinction is that its members paid a subscription fee that covered the expenses needed to buy books and maintain the space, and it remains that way today. The Free Library, a separate entity, was chartered in 1891 through the efforts of Dr. William Pepper, who secured funding through a $225,00 bequest from his wealthy uncle, George S. Pepper. Conversely, Free Library patrons can access library programs publicly and free of charge, hence the name!

Don’t get us wrong, though, we love our Ben Franklin! 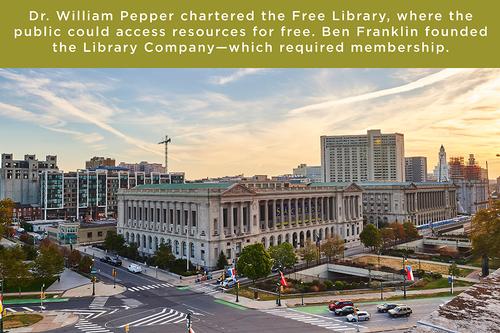 Our #FLPMyths social media series will attempt to dispel several library-related myths, and explain the truth behind these common misconceptions. Follow along on Facebook and Twitter over the next month, and of course, here on the blog!

Free Library Myth #6
1 Comment | Add a Comment
Would you also post the architects and the designers of the free Library. I to truly respect and appreciate all of the good the founding fathers of this great nations has contributed to.
Veronica Price - philadelphia, Pa.