Like the enormous condo building that is being erected on your block right now, the word "gentrification" has loomed large recently. Its definition is tough to pin down and experts have even disagreed on what exactly it is.

And yet, we have an idea of what gentrification looks like. We’ve seen it in areas like Brewerytown, Point Breeze, or Kensington. These are neighborhoods that have historically provided affordable housing, and where longtime residents, often African American or Hispanic, have carved out a sense of community. Blocks might be characterized by bodegas, by mom-and-pop casual food joints, and often by the longevity of families living there.

In a common schema of gentrification, things shift. A family moves out. Their home is purchased by an investor and renovated, often becoming a rental property. A coffee shop or craft beer bar might open, followed by another and another. Newcomers, often white, might trend younger and more affluent. And rents, justified by the lattes and lagers, go up fast (like that condo building—it was only scaffolding three weeks ago)!

Sometimes the area itself is renamed. Part of Point Breeze is now known as Newbold. Kensington now includes a district that’s been dubbed Stonewall, much to the furor of many community members.

However the scene plays out, we might think of gentrification this way—rather than being an organic change in a neighborhood, it can be the result of a series of intentional choices that are designed to increase new stakeholders’ bottom lines. Often, the results favor those with the most options. Developers and investors provide housing at a profit margin. Philadelphians with more comfortable incomes choose this less expensive housing, the better to afford more creature comforts. Many of these new residents might have lower paying white collar jobs, such as those in the helping professions—teachers, nurses, social workers, or, ahem—library staff. But their willingness to pay more than longtime residents drives up the rent. And small business proprietors see opportunity, but a five-dollar mocha or a fifteen-dollar grass-fed burger might be above what many older residents can afford, even if the restauranteur is doing good in her own way by using local or sustainable foods.

It’s a complex problem with uneasy solutions. A Google search on the matter will tell you to simply not move into a gentrifying neighborhood, but many might feel that’s easier said than done. The truly selfless might reconfigure our standards of living and spend a much larger portion of our incomes on housing, but most of us won’t. And so we move into that condo building, the one that opened while I was writing this piece.

But if we do move into in a gentrifying neighborhood, we can choose where we spend our money, and support longtime businesses. Rather than keep to ourselves, or only talk to neighbors we feel we have more in common with, we can be equally friendly to everyone on the block. Perhaps if one neighbor takes part in a civic engagement program, she can talk with another about doing the same. Because in order for any conversation to happen, it has to open with a level of trust.

If you’d like to learn more about gentrification in Philadelphia, there are more resources from minds more knowledgeable than mine. For a comprehensive picture of neighborhood changes in Philadelphia, the Pew Charitable Trusts’ gentrification report would be the place to start. A 2014 Next City article paints a more succinct picture, and includes a video of a panel discussion hosted at the Free Library of Philadelphia. One Book, One Philadelphia, by exploring the novel Another Brooklyn, will further these kinds of conversations about changing neighborhoods. And the Free Library’s new Center for Public Life will be hosting events and programs that explore topics like civic engagement and community advocacy, and how all of us can play a part.

What we can do as individuals might feel like a drop in a bucket left beneath the leaky ceiling of that hastily slapped-up condo—or the row house that will soon be razed so that an apartment building with Palladian windows and a yoga studio can go up. Living wages, literacy levels, childcare affordability, and rising housing costs are challenges to be reckoned with. They affect where Philadelphians live, and how much we can truly get involved in civic work. But just as gentrification is the result of intentional choices, so too can we live intentionally in communities. We’re a city of neighborhoods, of brotherly love and sisterly affection. Let’s act like it. Let’s start by saying hello.

And see Ms. Wyatt over there? She’s weighed down bringing in groceries.

Go give her a hand. 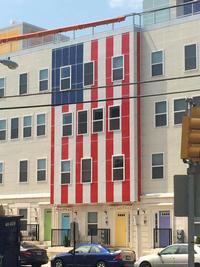 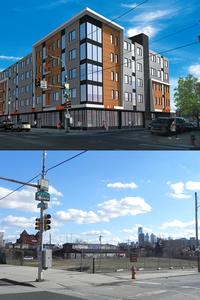 Proposed development at 27th and Girard Streets in Brewerytown section of Philadelphia.
1 Comment | Add a Comment
Great essay - and optimistically directed to give us a sense of community spirit.
Margaret Darby - Philadelphia