Nearly 100 years ago today, on February 2, 1922, bookstore-maven-cum-publisher Sylvia Beach stood anxiously waiting on the platform at the Gare de Lyon train station in Paris for the arrival of some very precious cargo on its way from Dijon: two copies of the first edition of James Joyce’s just-printed novel Ulysses.

Joyce, ever superstitious, wanted desperately to have the book printed on this day—his 40th birthday. And so every February 2, literature nerds the world over celebrate not just the Irish author, but his masterwork as well.

I came to Joyce through Ulysses. Somehow, I’d skipped over the requisite readings of Dubliners and Portrait of the Artist as a Young Man as an undergrad—and never looked back. It was only as my own years started to tick towards that Joycean 40 that I thought about crossing Ulysses off the ol’ literary bucket list.

Fortunately, our colleagues at the Rosenbach had just the ticket in their much beloved and respected Ulysses reading course. Over the span of 9 months I had the chance to read the tome, experience expert guidance from a professor, and ogle at historic artifacts in the Rosenbach’s collection—including the Ulysses manuscript in Joyce’s own hand.

That being said, I gotta admit that I was a bit of a hard sell on Ulysses at first. The myriad references to Catholicism and Irish History are nearly lost on me; I can’t make heads or tails of Stephen’s theory on Hamlet; and don’t even get me started on "Oxen of the Sun," the episode in which Joyce attempts to show the gestation of the English language by using all manner of prose. Utterly baffling.

Of all that I learned from my professor at the Rosenbach, perhaps the most valuable pieces of Ulysses advice was: push through. Something doesn’t make sense? Let your eyes glaze over and just take in the language. Getting frustrated by an episode (cough, cough, I’m looking at you "Oxen")? Skip to the next! Allowing myself some leeway with the book was just the ticket. If you just push through a tricky bit, you are sure to find something funny, dirty, thought-provoking, or just-plain-odd waiting at the other end. By the close of the class I was a confused convert, but a convert nonetheless.

I took my professor’s advice a little more to heart on my second read of Ulysses—this time with a group of colleagues from the Free Library and the Rosenbach—trying my best not to get tripped up in things I just didn’t understand. And you know what? It was even more fun than the first attempt.

I just finished my third go-round with Ulysses and there’s no turning back. I really played it fast and loose with this reread. I passed over full sections, skipped bits of others, and enjoyed it even more than before. At this point it feels a bit like returning to an old friend. A sort of strange, verbose, foul-mouthed old friend, but still.

I’m more convinced than ever that I could return to Ulysses again and again over the course of my lifetime and still find hidden gems and jokes—and joy—within its pages. It’s the Joycean birthday gift that keeps on giving! 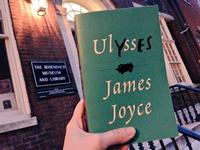 Ulysses and the Rosenbach go hand in hand! 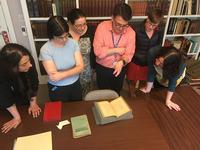 Class is in session at the Rosenbach, where we looked at The Little Review, which published Ulysses serially until ordered to stop by court of law.
2 Comments | Add a Comment
I love reading
Sandra - Texas
I love Ulysses. It's one of my favorite books. ( )
Jaqueline - Rio de Janeiro