Census 2020, Your Community, and You: Information and Employment Opportunities

The United States has counted its population every 10 years since 1790, and in 2020 we will do so again with a Census.

Why does the country undertake this challenging count? Well, it's mandated by the U.S. Constitution (Article 1, Section 2) AND it helps determine how BILLIONS of dollars in federal funds are allocated to states, cities, and communities each year. The results also determine how many seats in Congress each state receives.

The Census Bureau hires vast numbers of people to help complete this mandated and influential task. Do you want to be one of them? The pay rate for Enumerators, also known as "Census Takers," has been increased to $25.50 per hour. The Bureau also notes that they are not meeting recruitment goals in Philadelphia. This map makes it clear which neighborhoods are below 100% of the goal.

An important note, too, is that the PA Department of Public Welfare has ruled that income earned working for the Census will not negatively effect most social benefits. Additionally, the employment requirement to be a citizen is waived if you speak a language for which the Census is having trouble recruiting. If you turn 18 in 2020, you can apply. Those with criminal records may also apply.

Applications are being accepted now through July 2020 »

There is also a growing list of Census Job Fairs taking place during the entire month of January at neighborhood library locations throughout Philadelphia.

Counting every single person living in Philadelphia is critical to bringing hundreds of millions of dollars of Federal aid to our city. Let’s make our communities stronger together! 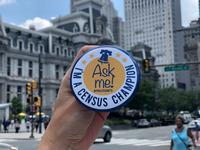 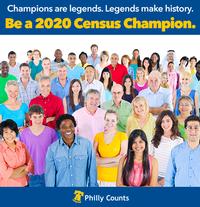 Be a 2020 Census Champion! Attend a Census Job Fair at a neighborhood library near you!
5 Comments | Add a Comment
Im currently unemployed right now. I am willing to work as much as neededto earn a weeks pay.
Dante Mazzatenta - South Philly
Census Taker
Mary Lou Orawsky - Philadelphia
seeking part time hours
mary gietmann - philadelphia
Am retired and want to earn a bit. Mainly I strongly believe in the census, and it should count everyone. Not afraid of any neighborhood. Love this city.
Rebecca freeman - University City philly
I haven't retired as of yet and looking for work - this isn't a legal community issue is it? Could have fooled me though.
Charles P. - North Philadelphia, Pa.