The Doctor is In: Doctor Dolittle Revisited

The Voyages of Doctor Dolittle was one of the first novels I ever read as a young boy growing up in the bucolic lakeshore countryside of Upstate New York.

The series of children’s novels written by Hugh Lofting starting in 1920 with The Story of Doctor Dolittle were the culmination and continuation of letters the author had written to his two young boys while he served in the British Army in World War I. Not only did these letters about a selfless doctor adventuring far and wide help Lofting escape the dreadful drudgery and danger of life in the trenches, if only for brief moments, they also helped forge a connection between his boys and their absent father.

The wonder of the doctor’s travels and his willingness to help without hesitation was what appealed to my young self. The fact that the good doctor came from a tiny, rural town (Puddleby-on-the-Marsh) very much like my own made this magical fantasy all the more real.

Things were not all rosy and bright in Lofting’s portrayal, though my naïve brain didn’t fully grasp the unsavory implications sprinkled throughout the plot. The gratuitous racial epithets of Polynesia the Parrot, explained away as a masterful command of "the most dreadful seafaring swearwords you ever heard," made me involuntarily blush and quickly look around the room, but the hurt and history of those words were beyond my limited understanding. And the whole episode of bleaching to make Prince Bumpo of a lighter skin was completely incomprehensible, but unsettling nonetheless.

Some have said sensitivities and understandings were different in the 1920s and that Hugh Lofting was writing for the society and times in which he lived. Of course, that doesn’t make those passages less hurtful or any less disturbing. Fortunately, responding to ever louder criticism in the 1970s and again in 1988, the publishers edited Lofting’s original text to remove all images—caricatures, really—of black people and all of Polynesia’s unfortunate phrases, even removing wholesale the skin-lightening episode. Happily, none of this well-intended editorial tinkering had the slightest effect on the tales' enduring charms. The same cheerful optimism about life's possibilities and the world's wonders awaiting the reader's discovery still abound. Perhaps most important, the Dolittle books are enthusiastic about the joy of using one's mind. What more can we ask of children's books?

I’m looking forward to the magic of cinema that captures that same charm, optimism, and joy that once caught the imagination of a small-town boy years ago.

Will you be seeing the newest film adaptation of Doctor Dolittle? Let us know in the comments! 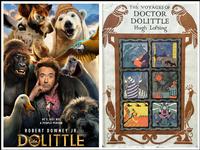 Dolittle is the latest book to screen adaptation of Hugh Lofting's Doctor Dolittle character and stories.
Add a Comment