These new titles coming to a library near you in February are, for the most part, inspirational, speak out against injustice, and strive for a better world. And then there’s the film Doctor Sleep, which is none of those. Take your pick and enjoy! 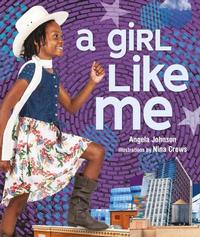 A Girl Like Me by Angela Johnson, illustrated by Nina Crews
"Once I dreamed I swam / the ocean / and saw everything deep, cool / and was part of the waves. / I swam on by the people / onshore / hollering, / 'A girl like you needs to / stay out of the water / and be dry / like everyone else.'" This inspiring picture book brings together a poem by acclaimed author Angela Johnson and Nina Crews's distinctive photocollage illustrations to celebrate girls of color, while empowering young readers to embrace their individuality, reject societal limitations, and follow their dreams. 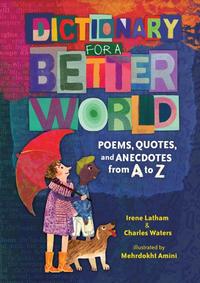 Dictionary for a Better World: Poems, Quotes, and Anecdotes from A to Z written by Irene Latham and Charles Waters; illustrated by Merdokht Amini
For poets, poets-at-heart, writers, and lovers of words, this book is a compilation of alphabetized words offering readers opportunities to reflect upon vocabulary that uplifts and acts to improve human connection and community. Each word is introduced with a poem and a quote to provide a deeper expression, often from children's literature. This collection is best summed up in the last poem, "The Etymology of Progress": "What makes the world / a zinger / is remembering / we're all in this... / together." 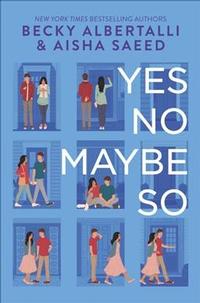 YES: Jamie Goldberg is cool with volunteering for his local state senate candidate—as long as he’s behind the scenes. When it comes to speaking to strangers (or, let’s face it, speaking at all to almost anyone), Jamie’s a choke artist. There’s no way he’d ever knock on doors to ask people for their votes… until he meets Maya.

NO: Maya Rehman’s having the worst Ramadan ever. Her best friend is too busy to hang out, her summer trip is canceled, and now her parents are separating. Why her mother thinks the solution to her problems is political canvassing—with some awkward dude she hardly knows—is beyond her.

MAYBE SO: Going door to door isn’t exactly glamorous, but maybe it’s not the worst thing in the world. After all, the polls are getting closer—and so are Maya and Jamie. Mastering local activism is one thing. Navigating the cross-cultural romance of the century is another thing entirely... 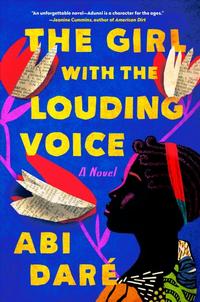 The Girl with the Louding Voice by Abi Dare
Adunni is a fourteen-year-old Nigerian girl who knows what she wants: an education. This, her mother has told her, is the only way to get a "louding voice"—the ability to speak for herself and decide her own future. But instead, Adunni's father sells her to be the third wife of a local man who is eager for her to bear him a son and heir. When Adunni runs away to the city, hoping to make a better life, she finds that the only other option before her is servitude to a wealthy family. As a yielding daughter, a subservient wife, and a powerless slave, Adunni is told, by words and deeds, that she is nothing. But while misfortunes might muffle her voice for a time, they cannot mute it. And when she realizes that she must stand up not only for herself, but for other girls, for the ones who came before her and were lost, and for the next girls, who will inevitably follow; she finds the resolve to speak, however she can—in a whisper, in song, in broken English—until she is heard. 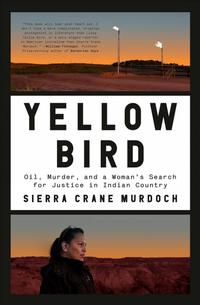 Yellow Bird: Oil, Murder, and a Woman's Search for Justice in Indian Country by Sierra Crane Murdoch
Released from prison in 2009, Lissa Yellow Bird found the Fort Berthold Indian Reservation in North Dakota profoundly changed—indeed, corrupted—by the Bakken oil boom. Several years later, when she began searching for vanished white oil worker Kristopher "KC" Clarke, she found herself caught between her own, newly wealthy tribe and the non-Native oilmen struggling in the wake of the recession. This is a true-crime story of a murder on an Indian reservation, and the unforgettable Arikara woman who becomes obsessed with solving it. 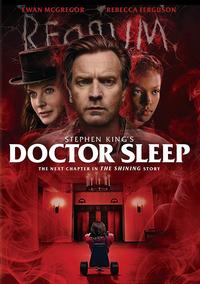 Doctor Sleep | Starring Rebecca Ferguson, Ewan McGregor, Carel Struycken, Jacob Tremblay | Directed by Mike Flanagan (Release date February 4)
Doctor Sleep is the continuation of Danny Torrance's story 40 years after the terrifying, murderous events that occurred at the Overlook Hotel in Stephen King's The Shining. Danny is all grown up but he is scarred by the trauma he endured as a child, struggling with alcoholism as he fights to find some semblance of peace. That hope for a peaceful existence is shattered when he encounters Abra, a girl with the same powers that plagued him as a child. Acting as her guide, he hopes to help her control these powers. Together, they form an unlikely alliance to battle the True Knot, a cult whose members try to feed off the "shine" of innocents to become immortal.

Check out these new titles available in February in our catalog and at a neighborhood library near you!
Add a Comment