The Free Library Has Your Ticket for Summer Movie Streaming!

As the unofficial beginning of summer starts this weekend, this is usually when I write a blog post about all the summer movies that are coming to theaters over the next 3 - 4 months... but this year, COVID-19 had other plans...

Since the middle of March, the majority of movie theaters (along with almost every other type of arts and entertainment venue) have been closed. Some theaters are planning to reopen soon,  while others still have no idea when or how they will begin to screen films again. In the meantime, Hollywood has flipped the switch on streaming first-run movies from home with⁠—no surprise⁠—a great deal of success (confession time: my household totally rented the new Scooby-Doo movie, Scoob!, and loved it!) Even drive-ins have become an option again!

Even though we may all still be at home right now, you can still get in a sunny holiday weekend mood by checking out some summer-themed streaming movies from our Digital Media offerings—the only ticket you need is your Free Library card!

Summer of 84 (2018)
Genre: Horror, Thriller, Mystery
Starring: Graham Verchere, Judah Lewis, Caleb Emery
Serious Stranger Things-meets-Stephen King retro '80s vibes in this thriller about a crew of teenage friends who suspect one of their neighbors might be a serial killer.

Red Hook Summer (2012)
Genre: Drama
Starring: Jules Brown, Thomas Jefferson Byrd, Toni Lysaith
In Spike Lee's 6th installment of his Chronicles of Brooklyn series is the story of a boy from Atlanta who finds his worldview changed as he spends the summer with his deeply religious grandfather in the housing projects of Red Hook, Brooklyn.

Edge of Seventeen (1999)
Genre: Romantic Dramedy
Starring: Chris Stafford, Tina Holmes, Andersen Gabrych
Teenager Eric is terrified and exhilarated by his sexual attraction to Rod, a college student and co-worker at a local fast food joint. But, Eric's sexual awakening is also complicated by his new romance with his best friend Maggie. Also featuring Lea DeLaria (Orange Is the New Black) and an upbeat '80s soundtrack that includes the Eurythmics and Bronski Beat.

What new or new-to-you movies are you looking forward to streaming this summer? Let us know in the comments below! 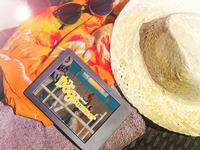 You can still get in a sunny holiday weekend mood by checking out some summer-themed streaming movies from our Digital Media offerings!

The Colonial Theater in Phoenixville, PA having some fun with their marquee while they are closed due to COVID-19.
film digital media summer pop culture
Add a Comment