by Kalela W. and Andrew N.

Fifty years ago, in June 1970, LGBTQ+ people in cities across the United States took to the streets in protest. They marched up Christopher Street in New York and down Hollywood Boulevard in Los Angeles. They marched past Chicago’s Water Tower, around Boston’s Back Bay, and through the Castro in San Francisco. They carried hand-written posters that demanded liberation and equal rights, calling back to earlier silent protests in Philadelphia and elsewhere, but also shouting that this time was different. This time, they marched with pride.

Those first Pride marches in 1970 commemorated the Stonewall riots of the previous summer, which were, fundamentally, an uprising against police brutality led by Marsha P. Johnson, Stormé DeLarverie, Sylvia Rivera, and other queer and trans women of color. Queer communities had experienced decades of police raids, harassment, and violence, and an NYPD raid on the Stonewall Inn in Greenwich Village on June 28, 1969, sparked days of violent conflict between police and LGBTQ+ people who were fed up with being attacked. Protest has been essential to the LGBTQ+ rights movement—from mobilizing resources for AIDS research and treatment to combating housing and employment discrimination—and remains so, especially as queer people of color and trans folx continue to experience disproportionate rates of discrimination and police violence.

Protest is also central to African American tradition, going back centuries to when enslaved people instituted work slow-downs, destroyed tools and other property, and otherwise rebelled against injustice—this included launching insurrections. In 1917, 10,000 African Americans silently marched against lynchings and violent mob attacks on African American communities, while the black press, led by Ida B. Wells and others, exposed these horrors.

But protest was often unpopular among non-Black Americans, who often saw it as disruptive and divisive. Decades later when a new era ushered in Civil Rights marches, sit-ins, and boycotts, these acts would be seen as civic disorder. By 1968, Martin Luther King Jr.’s disapproval rating was at nearly 75%. But it was his work, and that of collectives as diverse as the Student Non-Violent Coordinating Committee (SNCC) to the Black Panther Party, as well as the civil disobedience of everyday people that lead us to today’s multiracial, Black-led Black Lives Matter movement, and the recent uprisings we’ve seen over police brutality, racially motivated violence, and pervasive, systemic inequalities. 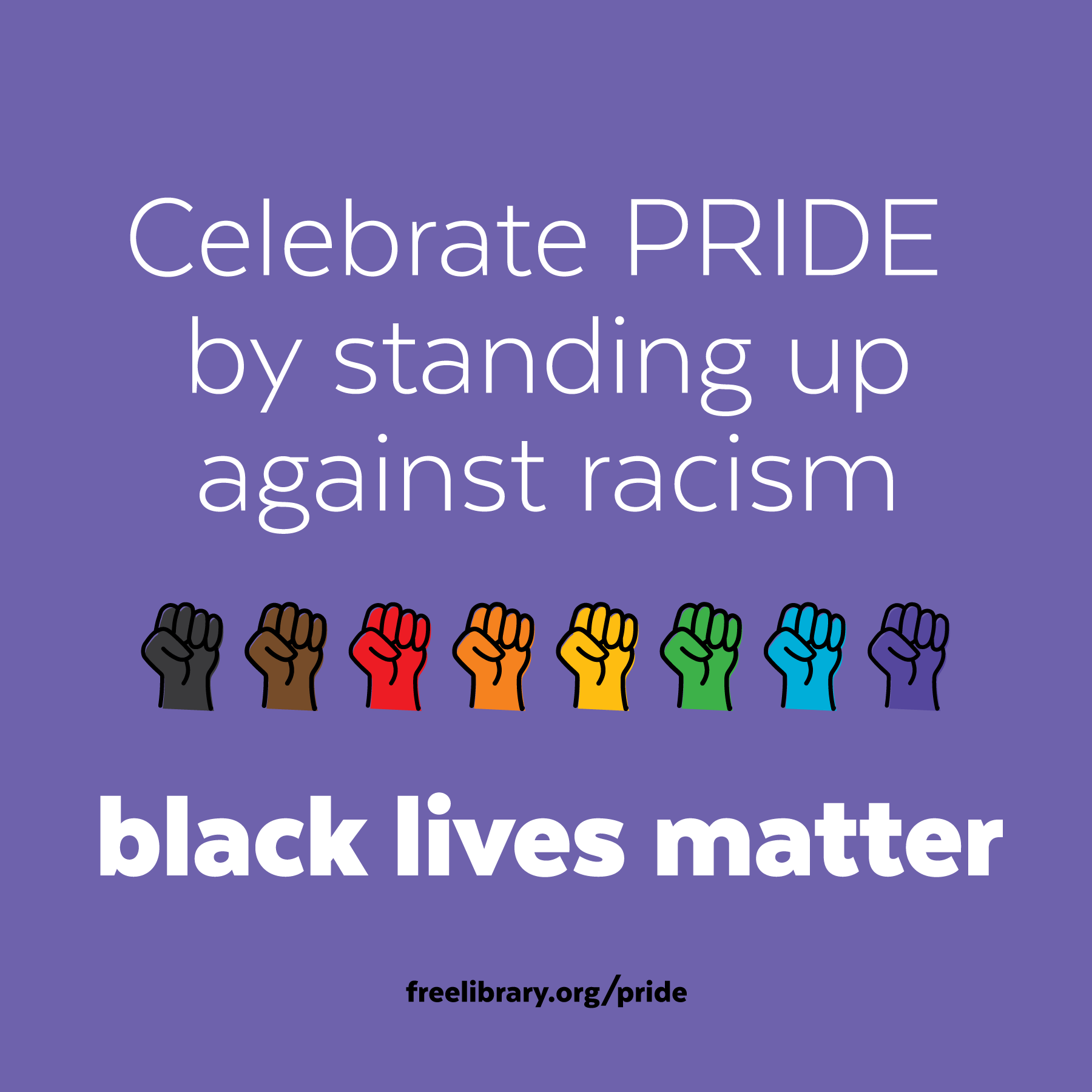 Racism has existed among LGBTQ+ folx just as prejudice against LGBTQ+ folx has occurred within African American spaces. But both of these communities intersect, and both hold the legacy of pushing against injustice with protest, holding fast to solidarity, and honoring identity and culture.

LGBTQ+ pride and African American heritage are rooted in acts of protest and solidarity—and share a vital history of queer people of color fighting for intersectional justice. That spirit guides the Free Library of Pride this year. We support #blacklivesmatter and honor LGBTQ+ Pride Month with programming—organized by Free Library staff who are within the African American and LGBTQ+ communities in our city—that aims to lift up these two movements that are stronger together.

Marsha P. Johnson (left) and Sylvia Rivera march in New York City in 1973, three years after the first Pride March.
Black Lives Matter Philadelphia Chapter
The four men at this 1960s Mississipi lunch counter will be arrested.
3 Comments | Add a Comment
How about we have a celebration of the individual? Why are tethered by identity to some group? Are we all communists now? Appreciate each human being for what they have to offer in the mosaic of our culture.
Richard Iaconelli - Philadelphia
Great article. Thank you!
Joe Shemtov - Philadelphia
Hello, can I please use this rainbow fist image for the cover photo of our community Pride group - Mallee Pride? It is beautiful. Thank you so much. Hannah X
Hannah Sycamore - Mildura, Australia