In addition to offering patrons ever-growing Digital Collections, dozens of research databases, and a rich variety of genealogic resources, the Free Library and the Special Collections Division deliver an exceptional customer experience by digging a little deeper into our archives for special requests.

Late in 2019, we received the following inquiry into one such special case:

I am writing to you from Rome, Italy, on behalf of my husband. We will be visiting Philadelphia in December and would like to know if you are able to tell us the location of the last grounds / premises of Edwin Fleisher's "Symphony Club." My husband is the grandson of one of the members, Arturo Andreoni, who can be seen in the photo at the link above (second row, next to the woman in the white, scalloped collar).

Since "Nonno Arturo" went on to teach choral singing for a number of years in Philadelphia before returning to Italy, my husband is curious to see if we can catch a glimpse of the building from the outside. My husband also happens to be a cellist and music teacher but this is a strictly personal visit. Thank you for any information that you can share. 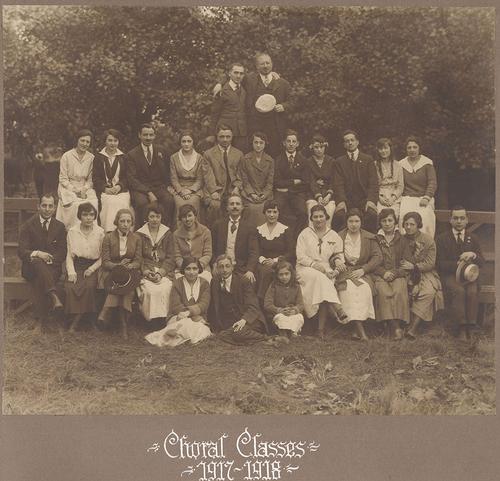 The mustachioed gentleman in a vested suit with wing collar shirt seated near Philadelphia philanthropist Edwin Fleisher in the image, Arturo Andreoni led the choral classes of the Symphony Club – the raison d’être of the Fleisher Collection of Orchestral Music – in the 1917-1918 season. Until now, Arturo Andreoni had been, to us, an unknown face in a crowd; to them, "Nonno Arturo" was the adventuring musician who found opportunity in the United States. Through a friendly exchange of emails, shared images, and research into online and internal archives, we got to know Arturo Andreoni and his contribution to Philadelphia’s musical culture.

Born December 6, 1876 in Italy, Arturo Andreoni studied operatic vocal singing and first moved to the U.S. in 1904. He relocated to Paris in 1907 to further his studies in operatic singing, and his instructors would include Italian-born tenor Giovanni Sbrigli (1829-1916), G. Spinetti, and Madame de Rousseau. On October 18, 1909, Andreoni would board the S.S. Chicago with his wife Maria "Joos" Andreoni, a professor of linguistics, in Le Havre, France and arrive in New York City eleven days later. The 1910 Census lists Arturo and Joos at 1719 Arch Street – now the site of Three Logan Square, the 57-story red granite skyscraper formerly known as the Bell Atlantic Tower. Over the next decade, he would work as an operatic voice teacher in a variety of places including Etsey Hall at 1701 Walnut Street headquarters of the Etsey Piano Company), the Zeckwer-Hahn Philadelphia Musical Academy (now the University of the Arts), and his private studio at 320 South 10th Street. Andreoni regularly advertised his studio in Philadelphia Orchestra programs and the Evening Public Ledger during the 1910s. 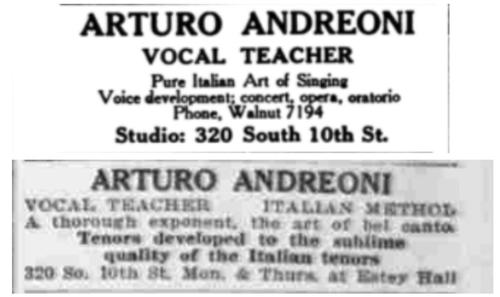 Andreoni joined the Symphony Club located at 1235 Pine Street to teach choral classes for the 1917-1918 season. Fleisher’s pioneering venture, established in 1909 as the first U.S. training orchestra, had taken on the dimension of a small de facto conservatory and expanded beyond a senior and junior string orchestra and full symphony orchestra to include chamber music, two-piano, theory, and choral classes by 1915, and Fleisher turned to the tenor Andreoni for his expertise. Andreoni appears in two group photographs from the time: The Choral Classes 1917-1918 group photograph and the Symphony Club Members & Friends 1917-1918 group photograph. A Philadelphia Inquirer article from the summer of 1918 documents a performance of the Symphony Club Chorus under Professor Andreoni for WWI veterans at the Ship and Tent Club at Christian and 23rd Streets. 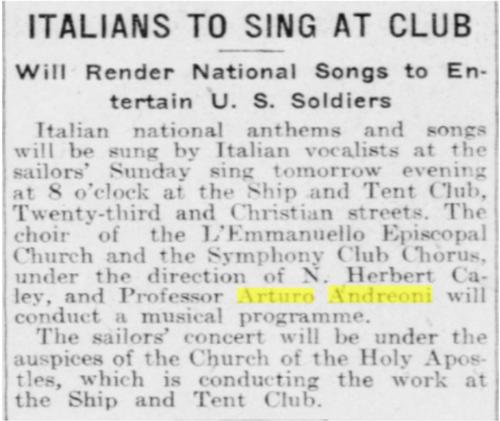 Italy’s entry into WWI had inspired Andreoni to write at least two nationalistic songs while in Philadelphia. The Catalog of Copyright: Part 3: Musical Compositions published in 1915 lists Suon la Tromba e là Patria ci Chiama (The Trumpet Blows and There the Homeland Calls Us), and the Biblioteca Universitaria Alessandrina in Rome houses a copy of the lyric for La Canzone del Soldato (The Song of the Soldier), for which Andreoni also reportedly wrote piano accompaniment. It is unclear whether the Symphony Club chorus performed these specific tunes for the Ship and Tent Club performance, but they would have been appropriate contextually. 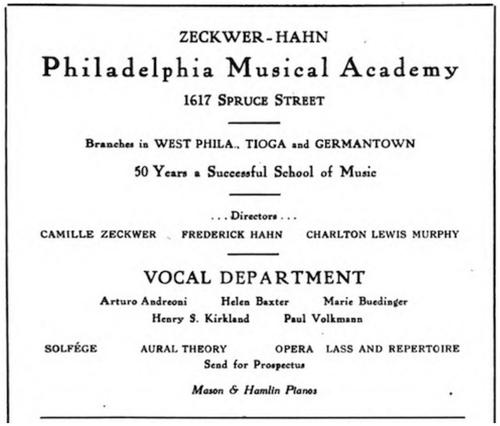 An advertisement for the Philadelphia Musical Academy naming Arturo Andreoni as part of the Vocal Department. Clipping courtesy of Graziano Nori.

Andreoni’s time in Philadelphia ended when his parents’ declining health necessitated he return to Italy in 1920. He soon became involved in protests against the newly formed Fascist Revolutionary Party in November 1920 and was detained for over nine months for his activities. Professionally, Andreoni would maintain a private studio teaching vocal soloists and served for a time as Choir Master at the Teatro Rossini in Pesaro, Italy before eventually returning to the Abruzzo region of Italy. Hindered from returning to the U.S. in part by the rise of McCarthyism, he would remark, "Strange country, America! It has welcomed political asylum seekers like the great [Arturo] Toscanini and at the same time has become so rigid in its anti-Socialist attitudes." He never returned to the United States, passing away in Montorio al Vomano, Italy in 1970.

Finding "Nonno" in our archives teased out more details of the evolving musical culture in early 20th century Philadelphia and put a name to one of many faces in the Symphony Club photographs. The serendipitous trans-Atlantic exchange mirrors Graziano Nori’s own reflection on his grandfather’s relationship with Fleisher: "I like to imagine that they were great friends … sharing a great project." 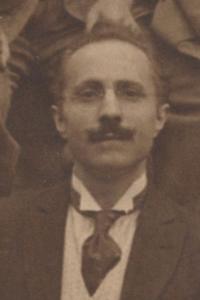 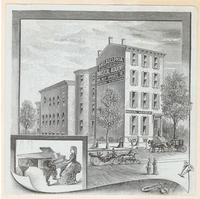 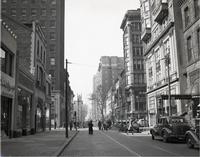