In Appreciation of Octavia Butler

That’s all anybody can do right now. Live. Hold out. Survive. I don’t know whether good times are coming back again. But I know that won’t matter if we don’t survive these times.
― Octavia E. Butler, Parable of the Sower

Octavia Butler’s breathtaking body of work deals broadly with racism, as well as with other -isms, inequalities on this planet, and on others. The Parable of the Sower, for instance, depicts an Evangelical Strongman elected president with the slogan "Make America Great Again," and reinstitutes a system of debt-slavery that abuses all kinds of vulnerable people. It also features a young Black woman who forms a survivalist, utopian in a dystopian community of mutual assistance and protection.

But the fourth and last of her novels are particularly about two Black women navigating relationships with white individuals as well as white power structures. Sure—one of those women is a 30-something-year-old Vampire who looks like a little girl, and the other one an involuntary time-traveling warehouse / factory worker and writer, (which, except maybe for the time-traveling, Butler herself had been when she wrote it).

When I started this appreciation post in honor of Butler, I thought I was going to be writing mostly about her short stories "Speech Sounds" and "The Evenings and the Morning and The Night"—both set in epidemics and their aftermaths—and what they might help us understand about our collective lives over the last several months. But I had to highlight instead the ones that most deeply speak to the value of Black life and White responsibility to organize against white supremacy. 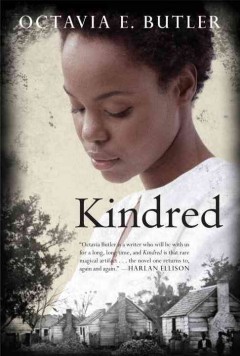 Book, ebook, and audiobook in our catalog.

In her fourth novel, Kindred (1979), Butler shows us Dana, a Black woman from California in the 1970s (and who is married to a white man). As she and her husband unpack boxes in their new apartment on her 26th birthday, she finds herself witnessing a child drowning in a river. Dana pulls a white kid out of the river, and she and the reader get up to speed that she is now at a plantation in Maryland well before the 1860s. Then it happens again, when the kid is older, and has grown even more nasty and abusive than the first time. Because that kid is the son of the owner of the plantation and, we learn, is one of Dana’s ancestors. That means, of course, that Dana’s Black ancestors are also in the story, owned and terrorized by her White ones. And when, during one of Dana’s subsequent transportations to the past, her white husband Kevin travels with her and ends up stuck, alone, in slave-holding Maryland for years and years while, in the meantime, has been back in her own time for only a few weeks or months.

I tell you this much plot because what I really want to draw your appreciation and attention to is the emotional complexity possible in these dynamics Butler dramatized, and to think about how her writing can help you think about Black lives and racism, and White privilege and sexism and coercive violence and feminism and resistance and power. Dana’s and these other characters make you ask what you would give or take to do what you think is right, and how what you think is right might cross boundaries forever. 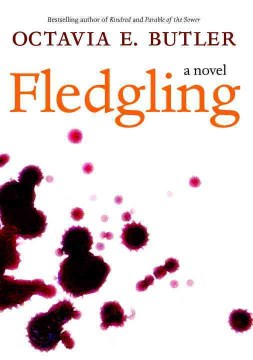 Book and audiobook in our catalog.

29 years and 12 novels later, Butler’s last novel, Fledgling, was published just a year before her shocking and untimely death in 2006. It told the story of another Black "woman," Shori,  in her 30s, a vampire with the appearance of a young adolescent who wakes up half-dead and with no memory. But she has brutal strength and speed, and sometimes needs to kill to survive. Butler’s version of vampires follows some of what we are familiar with, including some big world-building rules that let us know we are in for something new. These vampires reproduce sexually and live in and among giant, interconnected families that are mostly sex-segregated (so Shori’s mothers lived apart from her fathers). Also, although they drink blood and are capable of killing humans, their preferred mode of living is to have a coterie of human companions around, each of whom feeds any given vampire just a little of their blood every so often. These relationships cause Shori to bond with the people she feeds from deeply, emotionally, and sometimes romantically. These new families of humans linked to her also need to negotiate their complicated emotions about her polyamorous and sustenary reliance on the others.

Oh, and Shori is a genetic experiment. She’s the last in a long line of female vampires expert in genetic adaptation, the first Black vampire whose genetic changes confer on her limited protection from the sun. But what we don’t really dig into until the last half of the novel, when it becomes a stark, realistic vampire tribunal, is that this is a problem because vampires, in this world, are supremacist cousins to humans, a sort of Neanderthal or Denisovan called the Ina that always evolved alongside us, hidden and surviving by feeding on humans in these mutually beneficial feedback loops of blood and love, pleasure, protection, wealth. And, as you might suspect, want Shori destroyed to protect their white (vampire) supremacy. Again, I’m spending so much time previewing the story so you can imagine the deep provocation of intense feelings and concepts about race, racism, purity, power, sex, physical appearance, internal reality, and so on. As in Kindred, readers will walk away from these stories, the books still clutched in their hands, asking questions, processing feelings, wiping tears, or letting them flow.

On June 22, 2020, she would have entered her 73rd year. I wish she had been able to keep telling us what was going to happen after 2005. We need it. But one incredible legacy of Butler’s was that now there are so many Black writers of speculative fiction and fantasy. Here are just a few who have published books this or last year:

and lucky for the world, so many more. 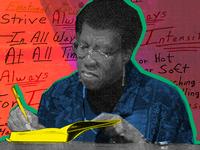 Award-winning Science Fiction author, Octavia Butler, would have celebrated her 73rd birthday on June 22, 2020.
5 Comments | Add a Comment
Someone sent me this blog because Octavia and I were born on the same exact day. I have only read Speech Sounds. That short story has much to say about the times we are living in now.
Carole Cohen - Abington
Joel gifted me my first Octavia Butler book and I'll be forever thankful! :)
Summer
Joel gifted me my first Octavia Butler book, for which I will be forever grateful.
Shinelle - New York
Thanks for this wonderful tribute to my favorite author. I love her books so much, they give me hope and inspiration for the times we are living in.
Marissa C - West Chester
Thank you Joel! It's time to revisit these novels!
Cassie O'Connell - Philadelphia