20 Great Graphic Novels and Comics from 2020

If ever there was a time to lose oneself in the extraordinary stories and colorful illustrations of comic books—2020 was that year!

While not necessarily a "Top 10" (especially since I selected twenty!), and definitely not in any order of greater or lesser importance, the following are just 20 really cool, fun, entertaining, and sometimes thought-provoking graphic novels and comics I read and enjoyed in 2020—all available to check out from the Free Library's collections, in both physical and digital formats. 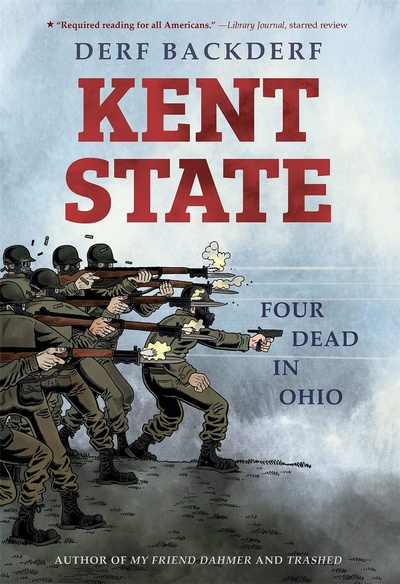 The untold story of the Kent State shootings, which took place 50 years ago this past May, is a tragedy as relevant today as it was in 1970. Derf Backderf uses his award-winning indie bio comix storytelling skills to illustrate the fateful and frightening scenario that took place on May 4, 1970, as the Ohio National Guard gunned down unarmed college students protesting the Vietnam War at Kent State University. In a deadly barrage of 67 shots, 4 students were killed and 9 shot and wounded. One of this past year's most sobering and essential reads! 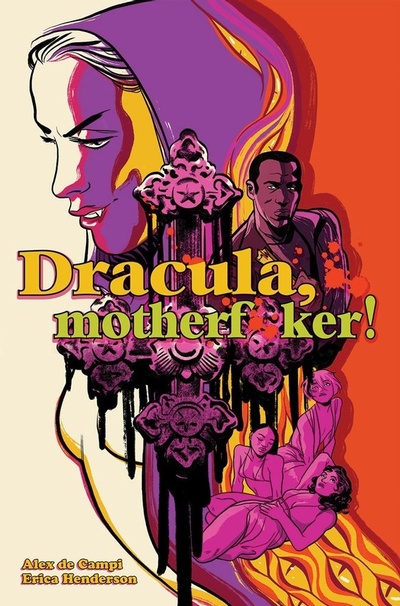 Dracula, Motherf**ker! written by Alex De Campi; illustrated by Erica Henderson
A 1970s pulpy California noir take on the vampire mythos, both colorful and cinematic. Crime scene photographer Quincy Harker stumbles into a real-life horror movie when he encounters Dracula and his equally fang-ful brides. Can he use the City of Los Angeles to aid in his escape or are there other sinister forces out on the streets of LA? My only complaint is this story needs to be longer, as it ended just when it was getting really good! 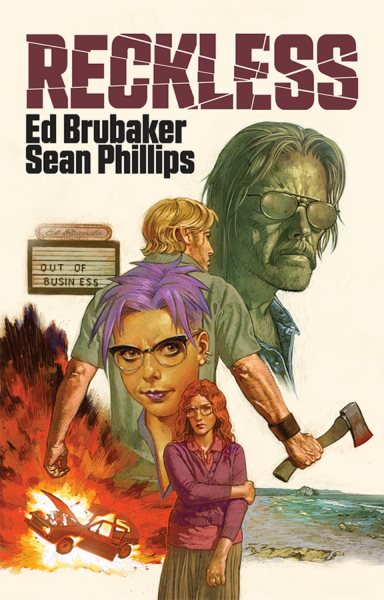 In another similar vein, Ed Brubaker and Sean Phillips return with their patented pulp and hard-boiled graphic novel storytelling. 1980s Los Angeles is where our story takes place this time, and it's full of sex, drugs, and murder. Ethan Reckless is our protagonist, like a burnt-out surfer version of Richard Stark’s Parker character. Fast dialogue, b-movie art, and all the requisite double-crosses and twists abound. Looking forward to reading more Reckless adventures in the future! 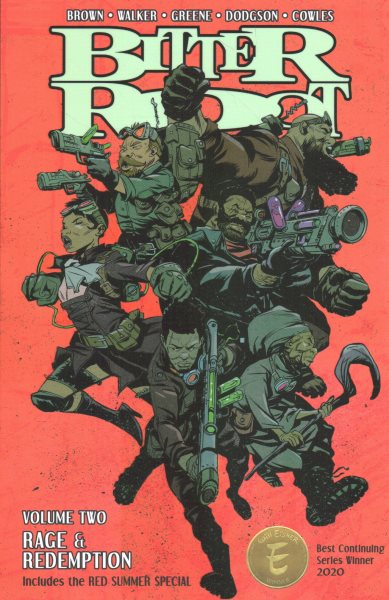 The Sangerye family is back and ready to battle monsters! They've already battled "jinoo", hideous creatures born out of hate and racism, but now are facing off with the "inzondo", a new kind of monster born out of grief and trauma. One of the more original and thought-provoking comic books being created today! 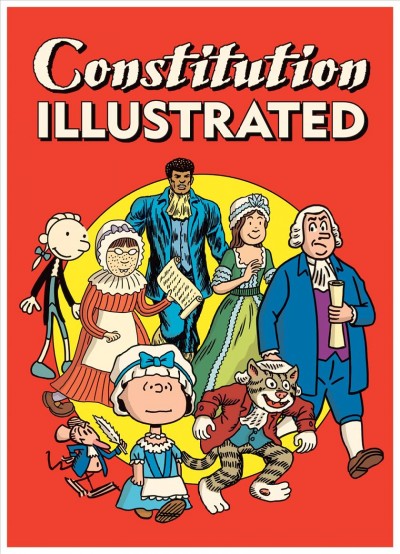 Constitution Illustrated by R. Sikoryak
A fun yet educational visual interpretation of the U.S. Constitution through a pop culture lens. The Eighteenth Amendment that instituted prohibition is articulated with Homer Simpson running from Chief Wiggum; the Fourteenth Amendment that solidifies citizenship to all people born and naturalized in the United States is personified by Ms. Marvel; and the Nineteenth Amendment offering women the right to vote is a glorious depiction of Wonder Woman breaking free from her chains. Political pastiche and colorful comics never looked or read so well! 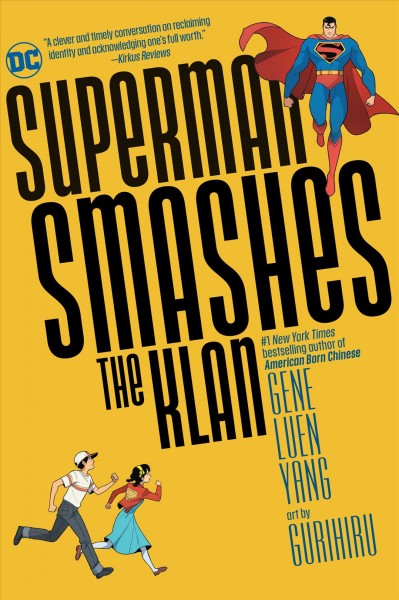 The title says it all! The year is 1946, and the Ku Klux Klan is starting trouble in Metropolis. The Lee family has moved from Chinatown to Downtown Metropolis and quickly becomes a target for the Klan's hate. Superman is able to fight the Klan's terror, while exposing those in power who support them. Harvey Award winner for Best Children or Young Adult Book! 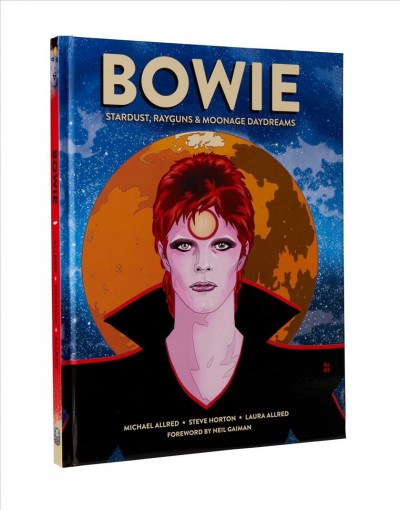 BOWIE: Stardust, Rayguns, & Moonage Daydreams written by Michael Allred and Steve Horton; illustrated by Laura Allred
If anyone was the living embodiment of a superhero, alien, and rock star rolled into one, it was David Bowie. What better way to honor such an extraordinary personality than in comic book form? The dynamic duo of pop culture comics, Mike and Laura Allred, are the perfect creative minds to pull off this tribute to Bowie. One of the most stunning looking graphic novels of the year! 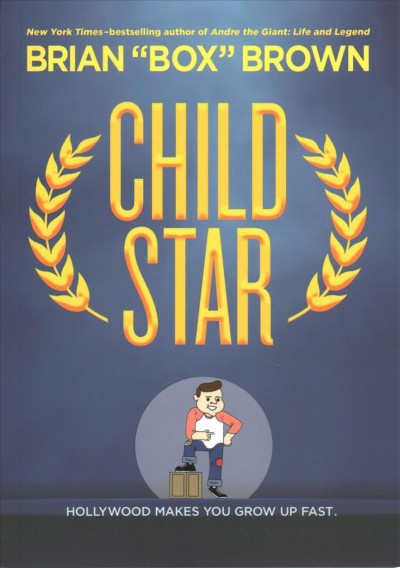 Child Star by Box Brown
Another year, another outstanding Box Brown graphic novel! This time, we delve into the world of child stars in this fictional documentary-style story about a boy named Owen Eugene. The character is an amalgamation of 1980s sitcom stars and the pop culture they created and lived through. An entertaining yet sad read. 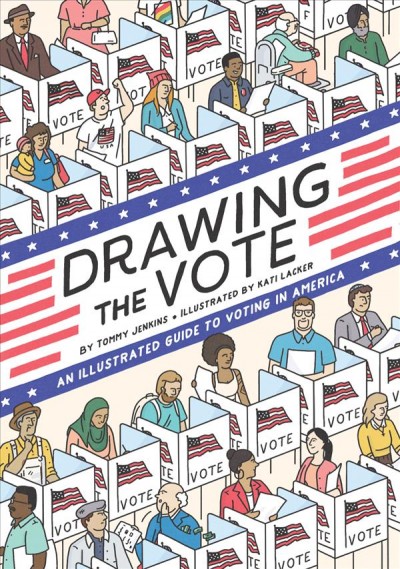 Drawing the Vote: The Illustrated Guide to the Importance of Voting in America written by Tommy Jenkins; illustrated by Kati Lacker

Coinciding with the 2020 US presidential election, this original graphic novel looks at the history of voting rights in the United States and how it affects the way we vote today. Well researched and informative, with complementary illustrations that help tell each story in a memorable way. A great book for students in the classroom and as a visual reference guide on your bookshelf at home. 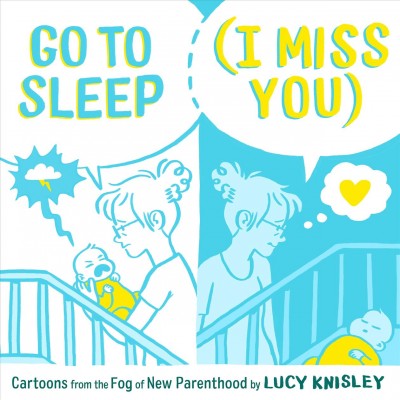 Go to Sleep (I Miss You): Cartoons from the Fog of New Parenthood by Lucy Knisley

Lucy Knisley's collection of popular Instagram cartoons on the subject of being a new mom. A great and enlightening read for expecting parents, new parents, and anyone who loves funny, relatable comics storytelling. 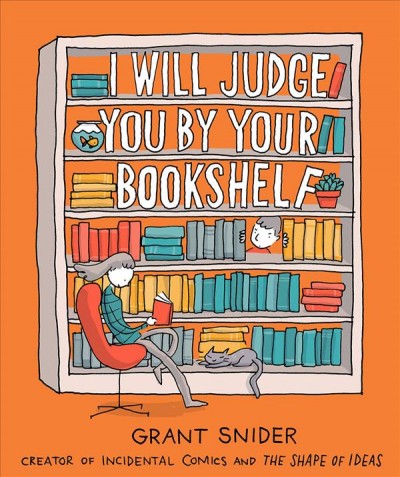 I Will Judge You by Your Bookshelf  by Grant Snider
In this lighthearted collection of one- and two-page comics, writer-artist Grant Snider explores bookishness in all its forms and the love of writing and reading. Make sure this one is on your bookshelf for all to see! 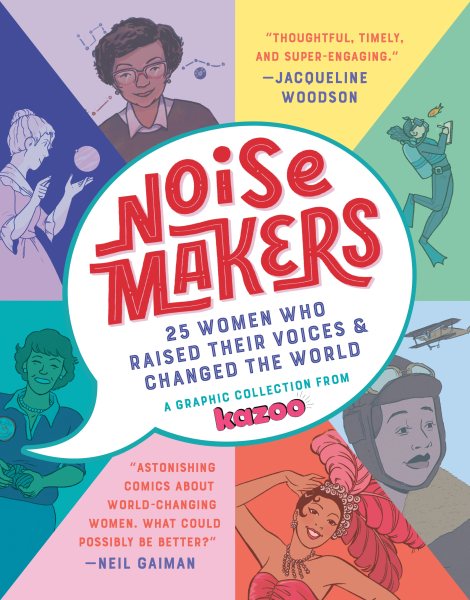 Noisemakers: 25 Women Who Raised Their Voices & Changed the World by various writers and illustrators from Kazoo magazine
From the creators of Kazoo magazine, a quarterly magazine for girls ages 5-12, comes a graphic novel anthology of women who are not afraid to make some noise! Inside is a look at the lives of 25 extraordinary women through the eyes of 25 talented comic artists in 25 distinct styles. In chapters titled "Grow", "Tinker", "Play", "Create", "Rally", and "Explore", you'll meet Eugenie Clark, who swam with sharks; Raye Montague, who revolutionized the design process for ships; Hedy Lamarr, a beautiful actress and brilliant inventor; Julia Child, a chef who wasn't afraid to make mistakes; Kate Warne, the first female detective, who saved the life of President-Elect Abraham Lincoln, and many more! 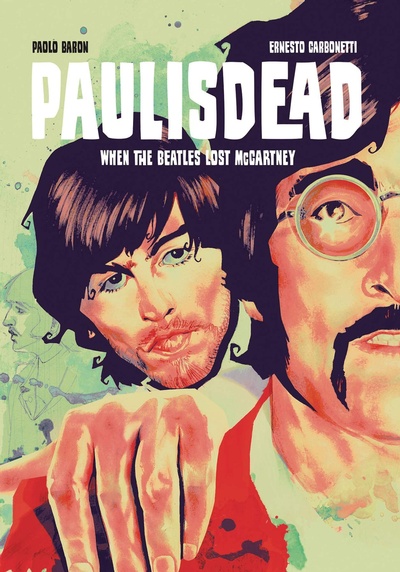 The urban legend that Paul McCartney died in 1966 now gets the graphic novel treatment. Part musical mystery, part psychedelic conspiracy, this is an interesting "what-if" type of story, with dramatically painted art on every page to help put the reader in the right frame of mind. 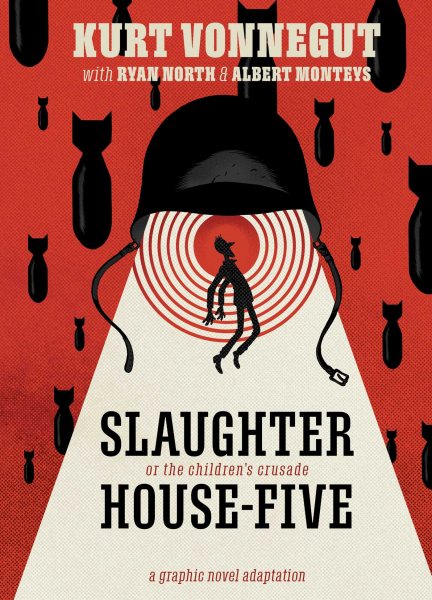 A graphic novel adaptation of Kurt Vonnegut's popular anti-war novel. Billy Pilgrim. Kilgore Trout. The planet Tralfamadore. The firebombing of Dresden. Time travel and coming unstuck in time. It's all inside this book! So it goes... 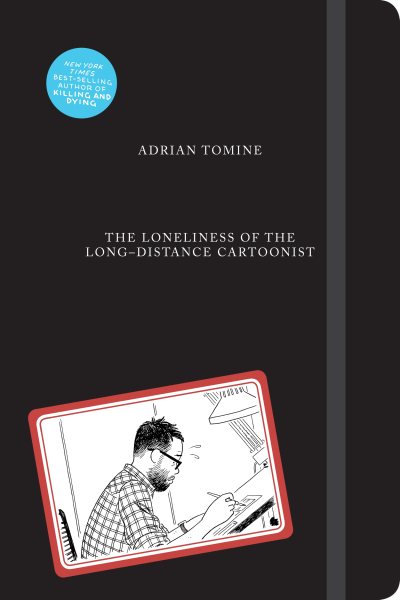 The Loneliness of the Long-Distance Cartoonist by Adrian Tomine

A funny and sad—and then ultimately uplifting—commentary on how our hobbies and passions in life can turn from a dream into a nightmare. Comic industry fandom, fame, interactions with other artists, interviews, and accolades are all examined, as well as all the other life-affirming memories of the artist's existence. An interesting look into the day-to-day and year-to-year life of an artist in the 21st century. 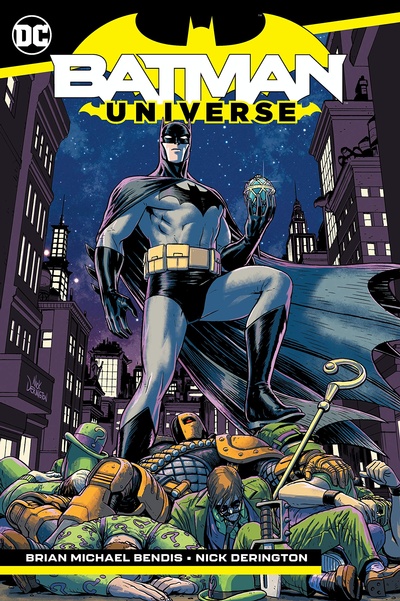 Batman Universe wriiten by Brian Michael Bendis; illustrated by Nick Derington
A cavalcade of characters appears in this newest Batman series, which has the Caped Crusader in full-on adventure mode as he journeys throughout the DC Universe to track down an item with incredible destructive powers. Appearances from the Riddler, Vandal Savage, Green Lantern, Green Arrow, Deathstroke, and Jonah Hex make this a fun and less-brooding Batman tale, and one that can be enjoyed by fans of all ages. 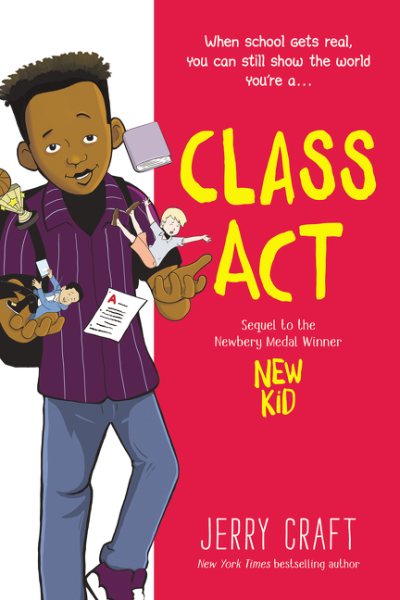 Class Act by Jerry Craft
In this companion book to the Newbery Medal and Coretta Scott King Award-winning New Kid, Jordan’s friend Drew is dealing with being one of the few kids of color in a prestigious private school. As the pressures mount, will Drew find a way to bridge the divide so he and his friends can truly accept each other? And most important, will he finally be able to accept himself? An important read for children and their caregivers about racism, school anxiety, empathy, and friendship. 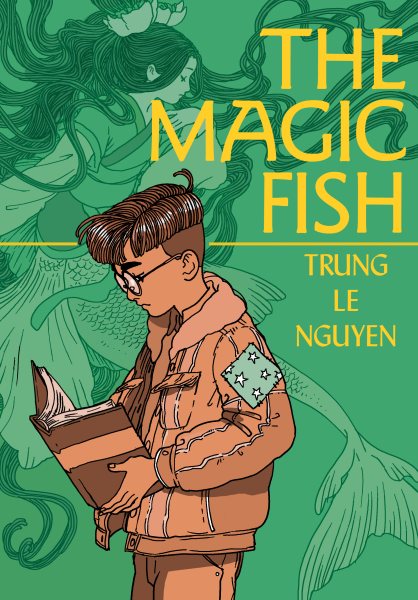 The Magic Fish by Trung Le Nguyen
A beautifully illustrated coming-of-age and coming-out story that follows a young boy named Tiến as he tries to navigate life through fairytales. A book that tackles important subjects and feelings in a way that is accessible for families and children to read, discuss, and learn together. 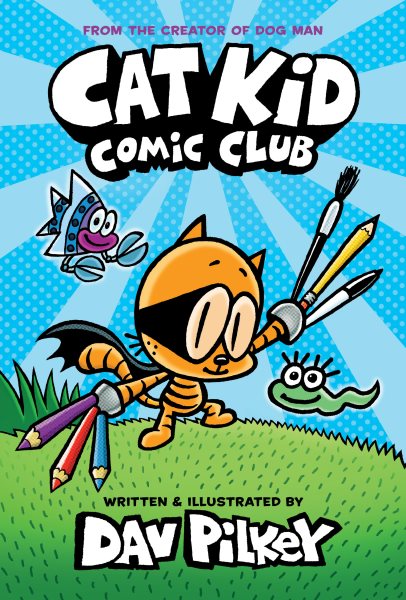 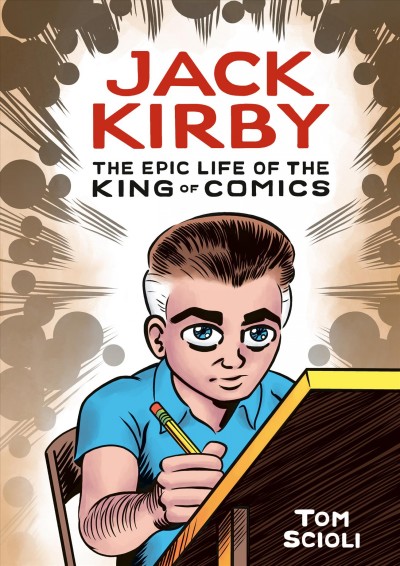 Jack Kirby: The Epic Life of the King of Comics by Tom Scioli
Captain America. Iron Man. Black Panther. Fantastic Four. X-Men. New Gods. These are just a small fraction of the now legendary superheroes created by Jack Kirby. This action-packed, full-color comic book biography tells the complete life story of the man nicknamed "The King". Drawn from an unparalleled imagination and a life as exciting as his comic book tales, Kirby's super-creations have influenced subsequent generations of creatives in the comics field and beyond. A must-read! 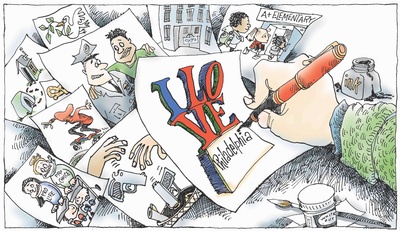 Signe Wilkinson, the first woman to win a Pulitzer Prize for editorial cartooning, and the cartoonist for The Inquirer and Daily News since 1985, is putting down her pencil at the end of 2020. Take a look back at her illustrious and illustrated career!

What were some of your favorite comic books and graphic novels that you read in 2020? What are you looking forward to reading in the new year! Tell us in the comments!

20 Great Graphic Novels and Comics from 2020!
Add a Comment