What Philadelphia Read in 2020

The longest year ever is coming to a close. (Amen.) That means that it’s time to peruse some Best of 2020 book lists!

Across the web you can find tons of these kinds of lists. Two of my favorites are Book Riot’s Best Books of 2020, where they break it down into 11 genres, including everything from children’s to horror. I also like the Ultimate Best Books of 2020 List, created by Literature Hub, which takes some of the work out of it for you, by aggregating over 41 lists and selecting the ones mentioned the most.

Here at the Free Library, we can certainly debate the best books of 2020. (For the record, it was Wow, No Thank You by Samantha Irby, obvs.) But what cannot be argued with is cold, hard data. Somewhat separate from the question of what is the greatest, you may wonder: what did Philadelphians actually read in 2020? Which ebooks and audiobooks were checked out the most? The answers may surprise you.

The digital book checked out at the Free Library the most this year was Becoming, the memoir by First Lady Michelle Obama, which was checked out a whopping 3,108 times! The most popular kid’s title, circulating 2,080 times, was Harry Potter and the Sorcerer’s Stone in audiobook format. The top adult fiction book this year was The Handmaid’s Tale by Margaret Atwood, with 1,422 checkouts. And finally, taking first place for teen titles is Angie Thomas’s, The Hate U Give, which was borrowed 1,036 times. Fun fact: in 2017, Angie Thomas visited the Philadelphia City Institute Library as part of the Social Justice Symposium, and spoke with a group of teens there about how they can combat hate and the enduring legacy of rapper and author Tupac Shakur. Read on for a full list of the top ebooks & audiobooks checked out at the Free Library in 2020.

Have you read any of the above titles? What’s the best book you’ve read this year? Let us know in the comments.

Thanks for using and supporting the Free Library, and here’s to a new year! 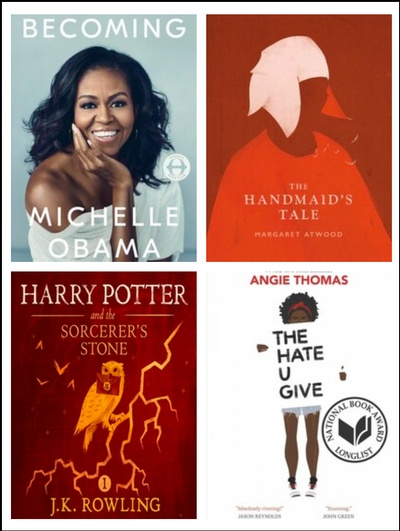 Have you read any of the above titles? What’s the best book you’ve read this year? Let us know in the comments!
Add a Comment