Reopening the Book of the Dead: The Evil Dead 40th Anniversary 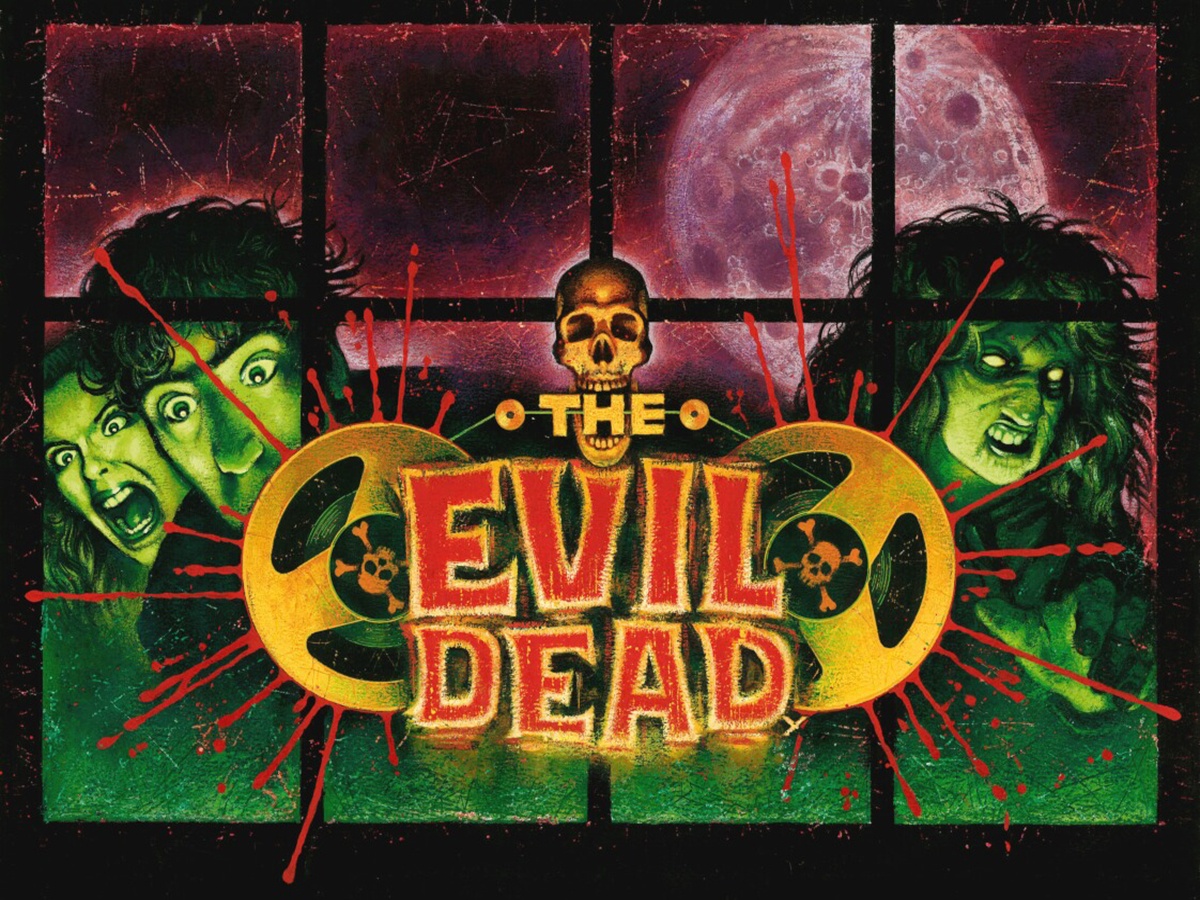 40 years ago on this day, October 15, 1981, a film debuted that not only scared audiences but would send shivers through Hollywood for years to come, serving as not only an artistic influence on future filmmakers but also a D.I.Y. guide to filmmaking. Let's reopen the Book of the Dead and look back on the cult classic horror film The Evil Dead...

The plot: five college students vacationing at a remote cabin in the woods accidentally release an evil force and become demonically possessed after reading from an ancient tome, the Necronomicon Ex-Mortis ("The Book of the Dead"). Only one member of the group, Ash Williams (Bruce Campbell), can save them all... but at what cost?

Here are some frightening facts and terror-ific trivia related to the film...

Lifelong Friends
Sam Raimi (Director and Screenwriter) and Bruce Campbell (Actor, Producer, Writer, and Director) have been friends since high school. The two made several Super 8 films together in college, which led to them creating the first iteration of The Evil Dead universe, Within the Woods. Campbell has since gone on to have acting roles in almost every single one of Raimi's films.

Famous First Jobs
One of director Joel Cohen's first film jobs was working as an Assistant Editor on The Evil Dead! He and his brother Ethan applied the same D.I.Y. ethic as Raimi to get their first film made, Blood Simple. They also would go on to collaborate again with the Evil Dead crew on the movie Crimewave, which they wrote, was directed by Raimi, and featured cameos from Campbell and Sam's brother, Ted Raimi.

Creative Practical Effects
Non-existent budget be damned, Raimi used creative ideas and workarounds to make his film—and its effects—special. Take for example the massive amounts of blood used in the film—it was just a simple combination of Karo syrup, non-dairy creamer, and red food coloring! When Special Effects Artist Tom Sullivan needed to make a melting skull, he used oatmeal, snakes, and guts made out of marshmallows. And last but maybe most important was the cinematography. While the Steadicam was invented in 1975 and has been a filmmaking mainstay over the years, Raimi could not afford one... so he invented his own take on it, called the Shaky Cam! The camera was placed on a wooden plank and held on either end, so the crew could literally run around the woods with the contraption to create chaotic camerawork, simultaneously inventing a new take on the scary monster's point of view.

A Book... er, Film... by Any Other Name
The film had other names before it became The Evil Dead. Raimi’s 1978 short film Within the Woods was the original basis for The Evil Dead. Book of the Dead was the next planned title of the film, which is a reference to the Necronomicon, the ancient book bound in human flesh that is used to summon demons in the movie. Producer Irvin Shapiro had other ideas though suggesting the film should be retitled The Evil Dead, fearing that "kids would be turned off seeing a movie with a literary reference". 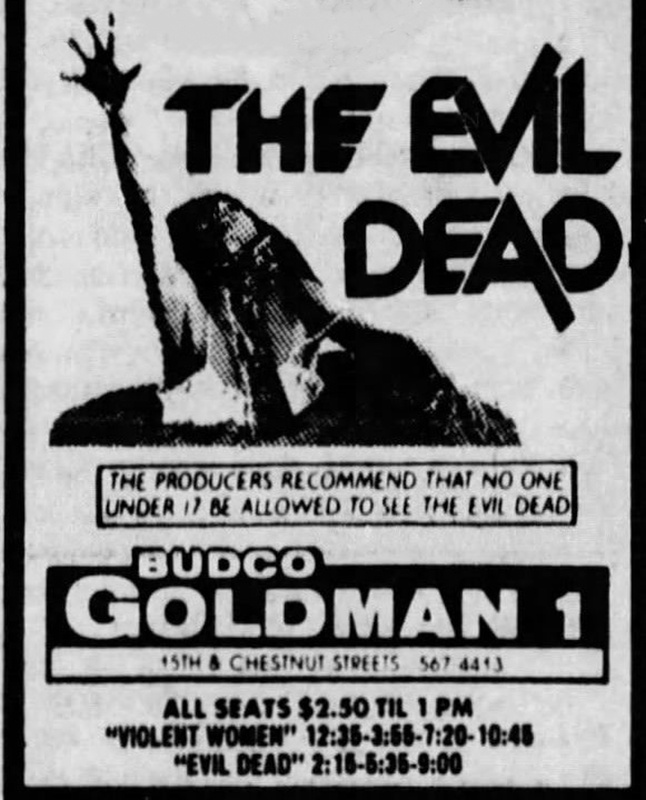 Newspaper ad announcing The Evil Dead playing at the Goldman Theatre, which was located near 15th and Chestnut Sts.

Dead-ly Inspiration
In the commentary track on the film's DVD / Blu-ray bonus features, Raimi says George Romero’s Night of the Living Dead was an inspiration for his movie, specifically for its use of 16mm film, its small budget, and its smart use of a single location.

Hell on Wheels
Raimi's 1973 Delta 88 Oldsmobile may not seem like a cool movie car, but its legendary presence on screen has been in almost all of his films since it first appeared in The Evil Dead.

"Fake Shemps"
After completing principal photography in the winter of 1979-1980, most of the actors left the production, despite the majority of the film being uncompleted. Most of the second half of the film features Bruce Campbell and various stand-ins—"Fake Shemps"—to replace the previous actors. Coined by Raimi, the term is named after Shemp Howard of The Three Stooges, whose sudden death in 1955 necessitated the use of stand-ins to finish the legendary comedy team's films that were in production.

Betting the Farm
When the production ran out of money, Campbell put up his family's property in Northern Michigan as collateral so that Raimi could finish the film and also blow it up to 35 mm which was required for theatrical release. Raimi was so grateful for his financial contribution, he credited Campbell as Co-Producer.

Video Nasty
The Evil Dead was one of the first films to be labeled a "Video Nasty" in the U.K., and was subsequently banned from video stores. The movie wasn't released uncut in the U.K. until 2001.

Stephen King Stamp of Horror Approval!
King saw the movie at the Cannes Film Festival and was apparently so scared he was screaming and shouting at the screen! In his review of the film, which Raimi then later used in press releases and promotional materials for the film, King said The Evil Dead was, "The most ferociously original horror movie I have ever seen." 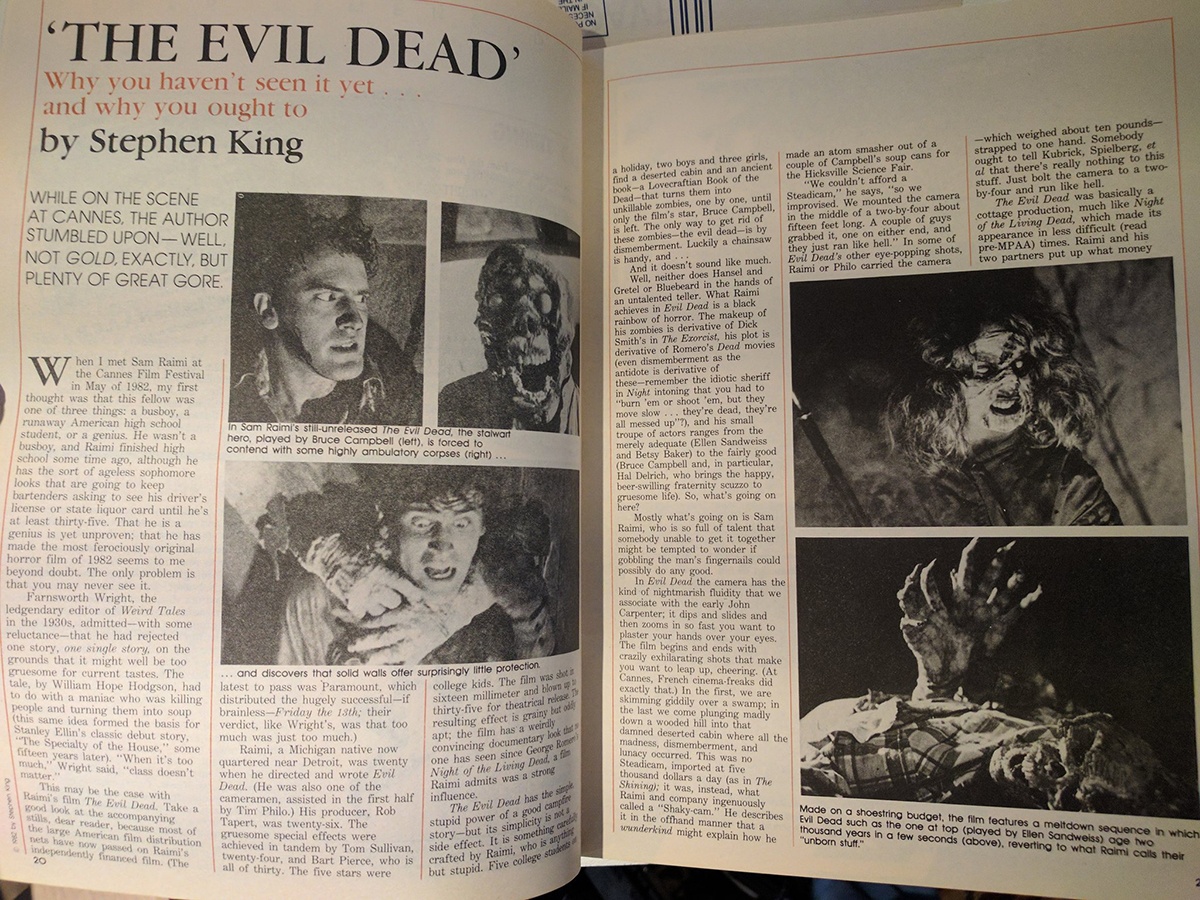 The Deadites continued to battle Ash for his soul in two sequels, Evil Dead II: Dead By Dawn (1987) and Army of Darkness (1992), which infused more comedy into the on-screen horror, further cementing the original's cult cinema status. A lackluster remake was made in 2013, but the series returned to form in 2015 with the Ash vs. Evil Dead television series, lasting for 3 seasons and, of course, ending on a cliffhanger! There has also been no shortage of comic book and video game adaptations and continuations of the Evil Dead universe. There was even a musical! For additional information on any-and-everything Evil Dead-related, you'll want to bookmark the Book of the Dead fansite.

Last and certainly not least, you can borrow the majority of The Evil Dead movies and series from our catalog!