Newspapers: A Guide Into the Past 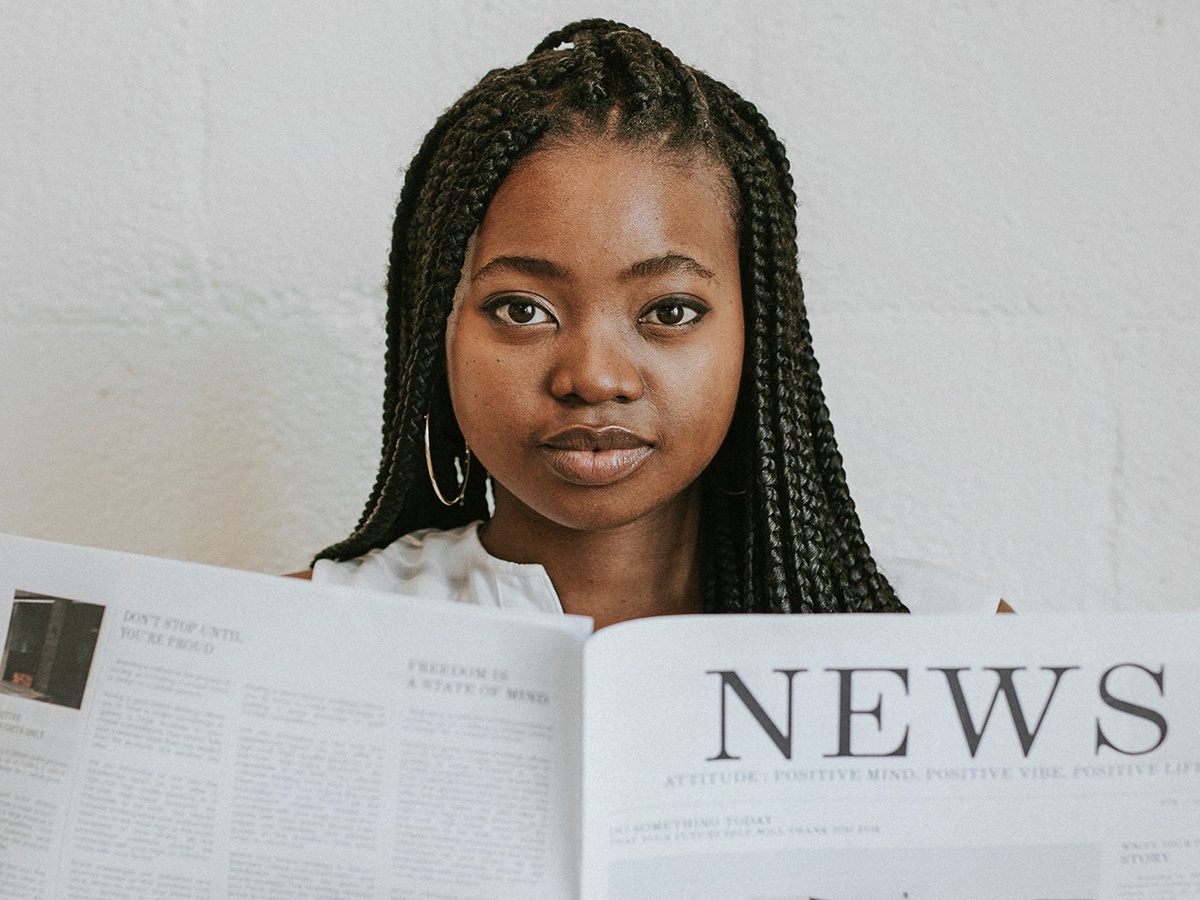 Many of us may get our news from online sources these days—social media feeds provide a constant source of information about everything from policy proposals, the weather, celebrity news, and more, as the events unfold in real-time. Moving between the national, the local, and the global within a matter of seconds, we can be connected to news almost instantaneously.

However, despite the allure of the digital age, there is something special about paper newspapers. The feeling of having a physical copy that has been artfully curated while writers, reporters, and editors have managed to witness, write, and then publish the news under urgent deadlines is truly inspiring to behold!

Between the digital and the analog, there is another option: digitized newspapers.

As we continue the festivities of Black History Month, I invite all of you to search through the Free Library’s extensive historical newspaper databases!

Why, you may be wondering, is this a worthwhile endeavor? We have, in this point of history, the easiest access to the words and images of the past centuries. With a few simple clicks, you can learn about what people thought and felt while history was happening. Reading newspaper articles from years ago, if not centuries, is as if we are talking with people directly. We connect with people of the past as they were living their lives without the need for any time travel.

On September 1, 1773, Phillis Wheatley’s collection of poems, Poems on Various Subjects, Religious and Moral, was published. Wheatley was the first Black poet to have a poetry collection published. Renowned for her poetic skills and her young age, many regarded Wheatley as a prodigy. Having traveled to London the same year her poetry collection was published, she met with influential leaders and thinkers. Wheatley resided in Boston, Massachusetts for the vast majority of her life.

This clipping is an advertisement in the Boston Gazette, dated January 31, 1774, for Wheatley’s published poetry collection. It notes that the book is "adorn’d with an elegant engraving of the author." The advertisement also emphasizes to subscribers that they "are requested to apply for their copies." 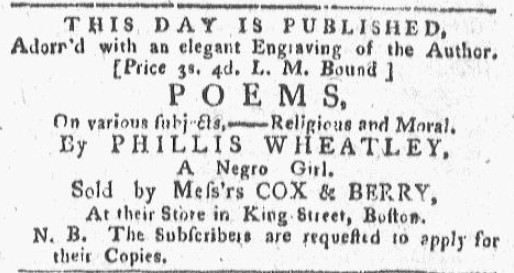 Richard Allen was born in Philadelphia on February 14, 1760. When Allen was 17 years old, he became a Methodist and eventually began preaching at the age of 22. Allen collaborated with Reverend Absalom Jones in 1787 to create the Free African Society, a non-denominational religious mutual aid society. In 1794, Allen along with fellow Black Methodist congregation members, founded the Bethel Church which helped to later create the African Methodist Episcopal Church, the first national Black Church in the U.S. In 1816, Allen became its first bishop.

On December 31, 1799, the Philadelphia Gazette published that two days prior, Reverend Allen had spoken to his congregation about the death of General George Washington, who had passed away a mere two weeks earlier. Rev. Allen took this opportunity to provide a summary of his sermon, in which he "took notice of the death … that melancholy event, which clothes the American people with mourning." 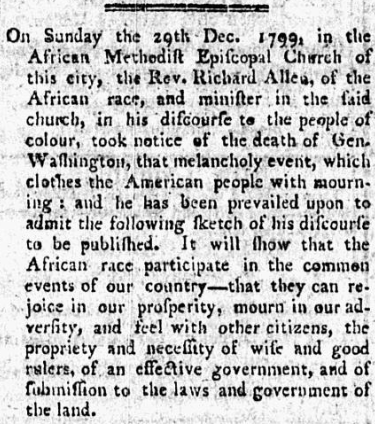 Frances Ellen Watkins Harper was a poet, author, orator, and journalist. After teaching for a couple of years, Harper began her career as a speaker, traveling across the United States and delivering lectures on topics like abolition, motherhood, politics, and religion. Harper published anti-slavery and abolitionist writings in various newspapers, and became known as one of the key contributors of Black journalism in the early to mid-19th century.

In this "Letter to the Editor", published on December 15, 1868, a J. Williams Thorne informs the editor of Harper’s "eloquence" and superiority as an orator. Thorne tells the editor and the readers that in Harper’s new poem "Moses," "the grandest truths are quickened into new and useful life by the purest poetic inspiration." Not wanting anyone to miss out on the opportunity to witness Harper’s brilliance, Thorne invites "all the lovers of truth and poetry" to go to Concert Hall in Philadelphia next Thursday night to listen to Harper themselves. 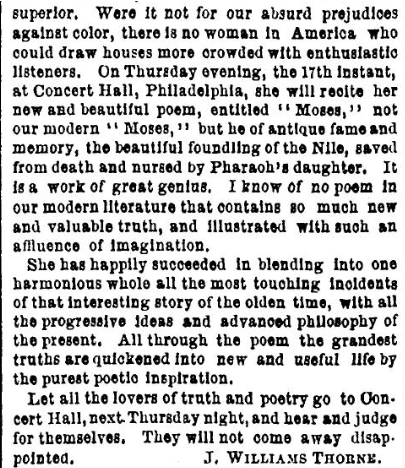 Bessie Smith was called the "Empress of Blues." A talented and beloved jazz and blues singer, Smith began singing at a very young age and eventually started touring with renowned singer Ma Rainey. Originally from Chattanooga, Tennessee, after completing her singing tour throughout the South, Smith moved to Philadelphia in 1920. By 1923, Smith signed a contract with Columbia Records, making over 160 recordings and selling millions of copies of her songs.

This Pittsburgh Courier article, published on March 15, 1924, documents Smith sharing the "origin of modern song and dance hits." Smith explains to readers that blues songs are "not funny." She further states, "Of course, the modern songs are greatly modified, but the original blues songs are deep, emotional melodies, bespeaking a troubled heart." 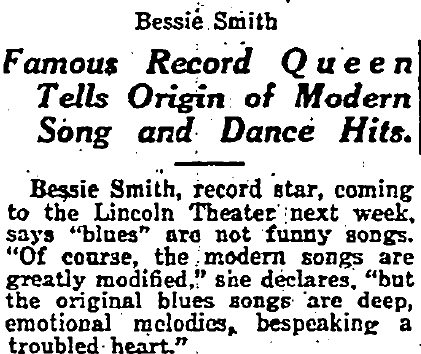 Toni Morrison is a celebrated writer of the novels Beloved, The Bluest Eye, and Song of Solomon, among many others. Born in Lorain, Ohio in 1931, Morrison studied literature and the humanities while a student and later became an editor at Random House from 1967 to 1983, the first Black woman editor in the company’s history. Morrison gave various public lectures and taught literature and creative writing in universities across the United States, including her alma mater Howard University.

On October 14, 1993, the Los Angeles Sentinel published news of Morrison’s Nobel Prize in Literature. Morrison became the first Black American (and the eighth woman, to date) to win the award. Morrison shares that as a writer, she has filled "huge silences in literature ... silences about Black girls, Black women, contemporary stories." 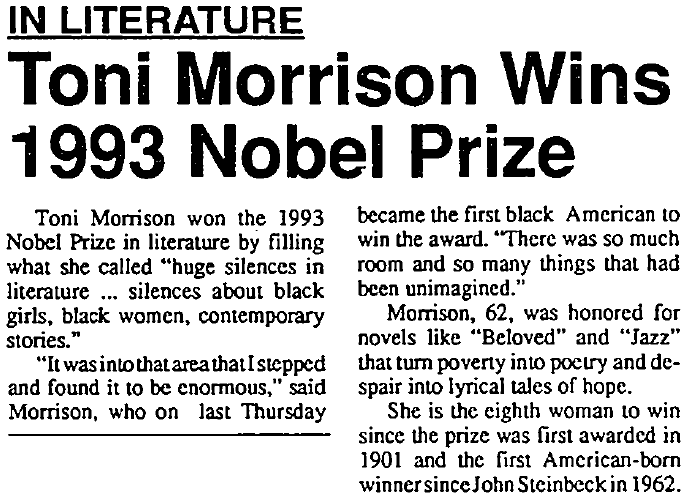 Share with us in the comments the important moments in Black history you’ve found while exploring historical newspapers!