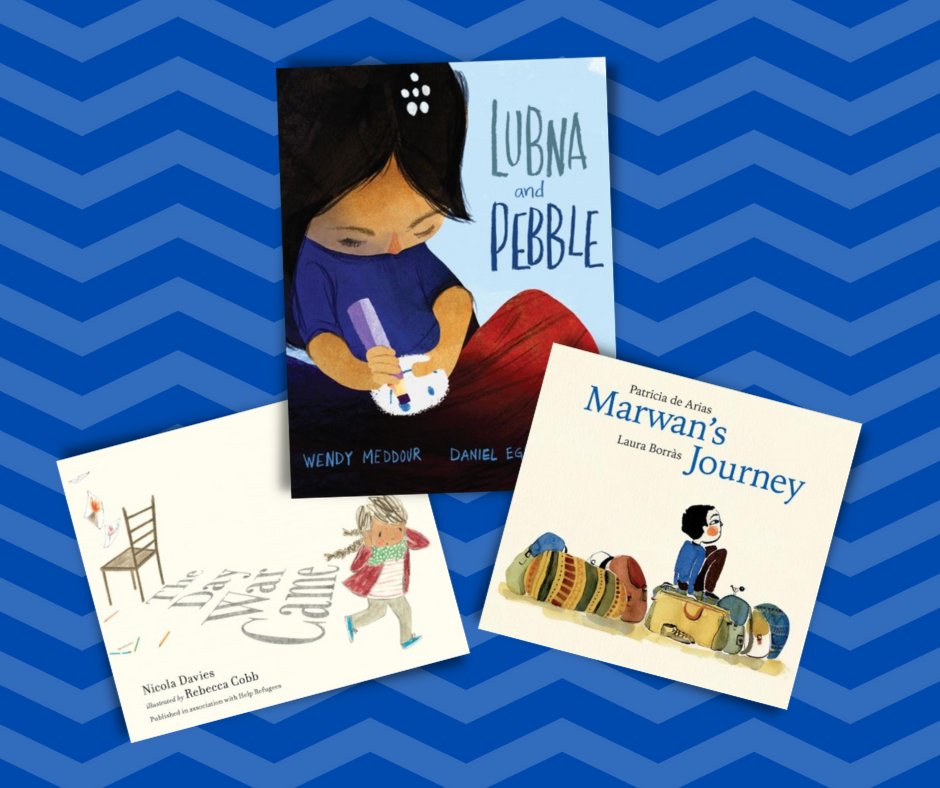 It is impossible to escape the news of war since Russia's invasion of Ukraine. Children hear about it too, and may need help understanding such large scale conflicts and its effect on people: the humanitarian crisis it creates throughout the area and the large number of refugees fleeing their homes.

Here are some books to help get the conversation started:

The day the war came by Nicola Davies; illustrated by Rebecca Cobb

The day war came there were flowers on the windowsill and my father sang my baby brother back to sleep.

Imagine if, on an ordinary day, after a morning of studying tadpoles and drawing birds at school, war came to your town and turned it to rubble. Imagine if you lost everything and everyone, and you had to make a dangerous journey all alone. Imagine that there was no welcome at the end, and no room for you to even take a seat at school. And then a child, just like you, gave you something ordinary but so very, very precious.

Lubna and the pebble by Wendy Meddour; illustrated by Daniel Egneus

In an unforgettable story that subtly addresses the refugee crisis, a young girl must decide if friendship means giving up the one item that brings her comfort during a time of utter uncertainty. Lubna’s best friend is a pebble. Pebble always listens to her stories. Pebble always smiles when she feels scared. But when a lost little boy arrives in the World of Tents, Lubna realizes that he needs Pebble even more than she does.

One night they came…The darkness grew colder, deeper, darker, and swallowed up everything…Marwan is a young boy on a journey he never intended to take, bound for a place he doesn’t know. On his journey, he relies on courage and memories of his faraway homeland to buoy him. With him are hundreds and thousands of other human beings, crossing the deserts and the seas, fleeing war and hunger in search of safety. He must take one step after another—bringing whatever he can carry, holding on to dreams. This is the journey of one boy who longs for a home, and we follow his path, walking hand in hand with him as he looks forward with uncertainty and hopes for a peaceful future.

Behind Sami, the Syrian skyline is full of smoke. The boy follows his family and all his neighbours in a long line, as they trudge through the sands and hills to escape the bombs that have destroyed their homes. But all Sami can think of is his pet pigeons—will they escape too? When they reach a refugee camp and are safe at last, everyone settles into the tent city. But though the children start to play and go to school again, Sami can't join in. When he is given paper and paint, all he can do is smear his painting with black. He can't forget his birds and what his family has left behind. One day a canary, a dove, and a rose finch fly into the camp. They flutter around Sami and settle on his outstretched arms. For Sami it is one step in a long healing process at last.

The treasure box by Margaret Wild; illustrated by Freya Blackwood

When the enemy bombs the library, everything burns, and only one book survives. As war rages around them, Peter and his father, alongside so many refugees, flee their home, taking with them a treasure box that holds something rarer than rubies and more precious than gold. They journey through mud and rain and long cold nights, and soon survival becomes more important than any possession. But as the years go by, Peter never forgets the treasure box, and one day he returns to find it.

My name is Bana by Bana Alamed; illustrated by Nez Riaz

When seven-year-old Bana Alabed took to Twitter to describe the horrors she and her family were experiencing in war-torn Syria, her heartrending messages touched the world and gave a voice to millions of innocent children. Written in Bana’s own words, this picture book offers a uniquely intimate child’s perspective on one of the biggest humanitarian crises in history. Bana has lost her best friend, her school, her home, and her homeland. But she has not lost her hope—for herself and for other children around the world who are victims and refugees of war and deserve better lives.

The cat man of Aleppo by Irene Lathan and Karim Shamsi-Basha; illustrated by Yuko Shimizu

Alaa loves Aleppo, but when war comes his neighbors flee to safety, leaving their many pets behind. Alaa decides to stay—he can make a difference by driving an ambulance, carrying the sick and wounded to safety. One day he hears hungry cats calling out to him on his way home. They are lonely and scared, just like him. He feeds and pets them to let them know they are loved. The next day more cats come, and then even more! There are too many for Alaa to take care of on his own. Alaa has a big heart, but he will need help from others if he wants to keep all of his new friends safe.

How I learned geography by Uri Shulevitz

Having fled from war in their troubled homeland, a boy and his family are living in poverty in a strange country. Food is scarce, so when the boy’s father brings home a map instead of bread for supper, at first the boy is furious. But when the map is hung on the wall, it floods their cheerless room with color. As the boy studies its every detail, he is transported to exotic places without ever leaving the room, and he eventually comes to realize that the map feeds him in a way that bread never could.

Rama and her family are forced to flee their once-peaceful village to escape the ravages of the civil war raging ever closer to their home. With only what they can carry on their backs, Rama and her mother, father, grandfather and brother, Sami, set out to walk to freedom in Europe. This unique picture book was inspired by the stone artwork of Syrian artist Nizar Ali Badr.

The journey by Francesca Sanna

With haunting echoes of the current refugee crisis this beautifully illustrated book explores the unimaginable decisions made as a family leave their home and everything they know to escape the turmoil and tragedy brought by war. This book will stay with you long after the last page is turned.

The enemy: a book about peace by Davide Cali; illustrated by Serge Bloch

After watching an enemy for a very long time during an endless war, a soldier finally creeps out into the night to the other man's hole and is surprised by what he finds there. What each discovers, as the story unfolds, is that the enemy is not a faceless beast, but rather a real person with family, friends, and dreams.

Be sure to check our catalog and Overdrive Kids eReading Room for these titles and many more being added.

1 Comment | Add a Comment
This is a really beautiful post. Thank you for highlighting picture books about conflicts across the Middle East as well.
Kayla - Philadelphia