The History of the Pride Flag

The Pride Flag as we know it today has gone through several iterations since its birth in 1978. It has a long and rich history that started in San Francisco with artist Gilbert Baker, who met a local activist who urged him to create a symbol to represent the gay community. That activist was Harvey Milk, who later became California’s first openly gay politician elected to office. Baker soon presented Milk with a flag that consisted of eight brightly-colored stripes, each color with a specific meaning. The original colors were hot pink for sex, red for life, orange for healing, yellow for sunlight, green for nature, turquoise for magic and art, indigo for serenity, and violet for spirit. In June of 1978, Harvey Milk along with many others, proudly waved this flag on full display during a procession in the San Francisco Gay Freedom Day Parade.

Tragically, just a few months later, Harvey Milk was murdered, leaving the community he loved and fought for devastated. After his death, demand for the flag skyrocketed, and Gilbert Baker had to do what he could to supply them. Unfortunately, hot pink fabric was hard to come by in large amounts, so he removed it from the flag to make production easier and more cost-effective. The following year, he decided to remove the turquoise and indigo stripes in favor of a more navy-blue stripe to represent harmony. Thus, the six-color flag many recognize today was born.

The flag remained unchanged until 2017, when Philadelphia's Office of LGBT Affairs unveiled a new Pride flag with two new colors: black and brown. The addition of these colors was to represent a new day of racial inclusion in LGBTQ+ communities, while paying homage to the sacrifices Black and Brown people have made through their activism. Many cities followed suit and adopted this new flag to show their pride. Go, Philly!

In 2018, designer Daniel Quasar created what is now called the Progress Pride flag. Quasar combined all the elements of the flags that came before him: Baker’s design, Philly’s design, and the design of trans activist and veteran Monica Helms, who in 1999 created the light pink, light blue, and white flag for transgender Pride. Light pink represents the traditional color for girls, blue for boys, and white for those who are transitioning or have not yet defined their gender. Quasar’s design uses Baker’s six-color flag as a backdrop, while the black, brown, and transgender flag stripes are laid on top in an arrow shape to illustrate the progress that is still ahead.

What is your favorite version of the Pride flag? If you could design your own, what would it look like?

To learn more about the flag’s history and other related topics, check out these reading suggestions from our catalog:

Pride : the story of Harvey Milk and the Rainbow Flag 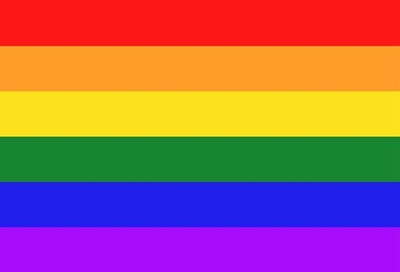 The Pride Flag as we know it today has gone through several iterations since its birth in 1978.
Add a Comment