The literary world recently lost a significant force whose experimentation with form prompted critics to call him "one of the most influential and innovative writers of the last 20 years." Author David Foster Wallace was found dead at his Claremont, California home on Friday night. According to police, his wife returned home to find that Wallace had hanged himself. The 46-year-old essayist, novelist, and humor writer was best known for Infinite Jest, the lengthy, 1996 work that Time Magazine included in its list of 100 Best English-Language Novels from 1923 to 2005. Wallace’s other works include his 1987 debut novel, Broom of the System, Girl with Curious Hair, Oblivion, and A Supposedly Fun Thing I’ll Never Do Again: Essays and Arguments. His short fiction has appeared in Esquire, GQ, Harper’s, The New Yorker, and the Paris Review. Critics have compared Wallace to writers like Thomas Pynchon and John Irving. In a New York Times Magazine profile, Frank Bruni wrote, “Wallace is to literature what Robin Williams or perhaps Jim Carrey is to live comedy: a creator so maniacally energetic and amused with himself that he often follows his riffs out into the stratosphere, where he orbits all alone.” Wallace taught creative writing and English at Pomona College as the first Roy E. Disney professor of creative writing. 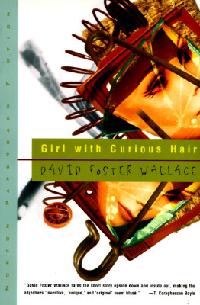 Girl with the Curious Hair, a collection of short stories
4 Comments | Add a Comment
I saw David Foster Wallace when he read at Parkway Central in the summer of 2005. He was a gracious guest and read a haunting story that has stuck with me ever since. Thanks for posting this sad news.
Joel - West Philly
What a tragedy this is. RIP, David Foster Wallace. Angela - Aberdeen, WA
Aah I am so sorry. I liked that author... Along I have only read his book "Infinite Jest". But I simply loved it. It is a superb book. I love the way he brings all the characters to life. It was a very refreshing book. - Daniel Gray
Daniel - California
Rest in peace.
L - GA