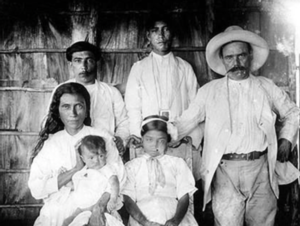 In My Broken Language--the One Book, One Philadelphia 2022 featured book--Quiara Alegría Hudes explores her own indigenous heritage and some of the history of indigenous peoples in Puerto Rico. This online presentation and discussion will provide an introduction to Caribbean people's histories, focusing on what indigeneity is and what it means for people living in, and diaspora of, the Caribbean today.

Many mainstream narratives about indigeneity embody colonial views of who Natives are, what they might look like and how they should act, and who can claim "Indigenous." Our discussion will draw from My Broken Language and explore what it means to decolonize perceptions and awareness of indigeneity.

Presenter Priscilla Bell Lamberty was born in Lenapehoking, North Philadelphia, and raised in the Hunting Park section of the city. She is a muralist and educator who has taught about Indigenous Caribbean culture for over 20 years, and the recipient of a Leeway Art & Change grant, Taino Storyteller of the Year Award, and Taino Muralist of the Year Award. She works as a freelance muralist with the Philadelphia Mural Arts Program and as a teaching artist for Fleisher Art Memorial.

Born in N.Y.C . from Puerto Rican parents, Luis Kacian Calderón has been an active member within the Taino community since the late 1980's. In NYC and has been living in Boriken ( P.R.) from 1996 to the present. He received a B.A. in secondary education in history and a minor in music. From the Interamerican University of Puerto Rico in San German. Kacian has studied Taino pottery with Alice Chevere of Morovis for three years. And also studied contemporary ceramics at Centro Sor Isolina Ferrer. Studied the pottery wheel with his teacher Eduardo Martinez. Once finished with his instruction he applied for his artisan license from Formento Industrial. He received recognition as an artisan and artist representing the island culture from the Instituto de Cultura Puertorriqueno, the I.C.P. Kacian has been working as a professional potter and ceramicist for twenty plus years. The artist lives and thrives with his wife Ana and their two dogs Luna and Neva in the southern town of Juana Díaz, Puerto Rico.