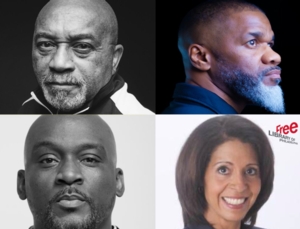 Tommie Smith and John Carlos made history at the 1968 Mexico City Olympics when they stood at the winners’ podium and raised their black-gloved fists to protest racial injustice in the United States. Smith, gold medalist in the 200-meter sprint, and Carlos, the bronze medal winner, were forced to leave the games and faced a swift and brutal backlash at home. In his illustrated memoir for young readers, Smith tells the story of his rural Texas childhood, early career, Olympic victory, and internationally famous protest.

In addition to his Olympic gold medal, Tommie Smith held the record for the 200-meter sprint for more than 44 years, held an additional six running world records, won the 1966 NCAA Men’s Outdoor Track and Field Championship, and was drafted into the NFL. The author of the memoir Silent Gesture, he coached track and taught sociology at Oberlin College. Smith is an inductee to the United States National Track and Field Hall of Fame and the California Black Sports Hall of Fame.

Derrick Barnes is the author of more than a dozen bestselling children’s books that celebrate African American culture, including The Making of Dr. Truelove, Crown: An Ode to the Fresh Cut, and the Ruby and the Booker Boys series. He has been honored with a Newbery Award and a Coretta Scott King Award

Emmy Award–-winning illustrator Dawud Anyabwile designed storyboards for Cartoon Network, TBS, TNT, and Boomerang. He illustrated the graphic novel adaptation of Walter Dean Myers’ book Monster and is the illustrator of the Brotherman: Dictator of Discipline comic series, among numerous other projects. His many other honors include an Eisner Award and a Glyph Comics Award.

Due to the changing nature of the COVID-19 pandemic, please visit our website before all events to find the latest guidance about mask requirements.
A book signing will follow the event
Books provided by Uncle Bobbie's Coffee and Books