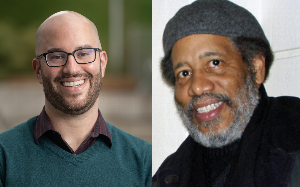 Dan Berger | Stayed on Freedom: The Long History of Black Power through One Family's Journey

In conversation with Michael Simmons and Robert Saleem Holbrook

Dan Berger is the author of the James A. Rawley Prize winning Captive Nation: Black Prison Organizing in the Civil Rights Era, an “illuminating” (The Nation) reevaluation of 20th century African American activism through the prism of mass incarceration. A professor of comparative ethnic studies and associate dean for faculty development and scholarship in the School of Interdisciplinary Arts and Sciences at the University of Washington Bothell, he has published op-eds and other work about critical race theory and social justice in a variety of newspapers, magazines, and scholarly journals. In Stayed on Freedom, Berger tells the story of the until-now unheralded Black Power activists Zoharah Simmons and Michael Simmons.

Alongside Zoharah and countless other organizers and activists, Philadelphia-raised Michael Simmons has fought for social justice and human rights for more than 55 years. His work includes time with the Student Nonviolent Coordinating Committee, imprisonment for draft resistance during the Vietnam War, assistance in the fair housing movement, and participation in the anti-Apartheid Movement. He spent more than two decades as a human rights organizer in Central European, both with the American Friends Service Committee and independently.

Robert Saleem Holbrook is the executive director of the Abolitionist Law Center.