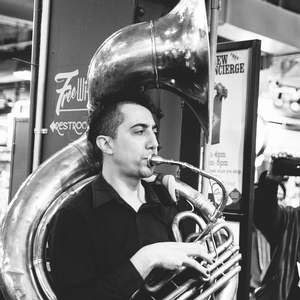 Dan Nosheny has been performing across a wide array of genres and styles for over two decades. A highly sought multi-instrumentalist in the Philadelphia music scene, he has been featured on accordion and baritone with the Balkan brass band the West Philadelphia Orchestra, on tuba with Ensemble Anomaly, and on trombone/tuba/accordion with Cuban master percussionist Francois Zayas. His projects blend traditional jazz styles with avant-garde and pop culture elements in whimsical, dreamlike, and downright funky combos. Dan has performed with Christian McBride, McCoy Tyner, and Laurie Anderson, and he has been a featured performer with the Violent Femmes since 1999.